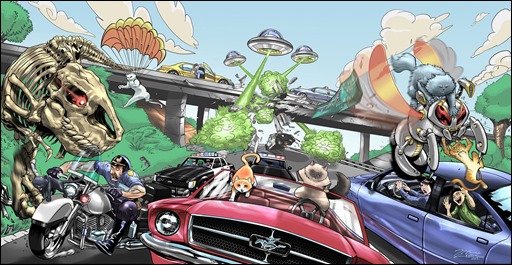 Here is the complete list of Action Lab solicitations for the month of August 2014.

Are the legends of Bo, the “teddy bear” gangsta, true? And, did we just say teddy bear gangsta?! You’re about to find out– when the soul of Gardia City’s toughest gangsta gets imbued in a plushy bear by a voodoo priestess. It’s Scarface meets Ted in this over-the-top video game style urban epic. Collects Bo Plushy Gangsta # 1-4.

The entire world knows the stark reality: everyone who manifests superpowers goes insane and becomes a threat to society. So, when Jake Roth develops superpowers but somehow keeps his sanity, he must decide whether to put himself at risk by using his powers to help people or do nothing and save himself while innocent people around him get hurt. Cover by Lee Moder, with a variant by Jamal Igle (Supergirl, Molly Danger) limited to 1500 copies!

Avengers and Justice League move over! The cutest heroes on the planet have arrived! Meet the Hero Cats of Stellar City

in this spectacular first issue. Not your ordinary house cats, they’re a tactical action-packed covert team dealing with extraordinary threats to humanity in ways that will amaze. Variant fold-out cover limited to 2,000 copies!

Itty Bitty Bunnies creator and cartoonist extraordinaire Dean Rankine lives down under, where Christmas is celebrated in the summer, so it makes perfect sense for his depraved creations to go on a holiday adventure now stateside. It also makes sense to the Bunnies to cook up a big batch of meth to help fund their Yuletide activities! Also available in a “Tickle Me Tyrone gift” variant cover, limited to 1500 copies!

Gavin learns the hard way to be careful what you wish for when he finally comes face to face with P. Stone! Fortunately, he’ll have some unexpected help from the folks who’ve been keeping an eye on him since the beginning of what could be the shortest crime-fighting career Apollo Bay history.

Jishin 自信 (Confidence): 14 year-old ninja princess Shianndrea Toshigawa and her strike team have a new mission: spy on their rivals, the Azumi Ninja Clan, and discover what secret dealings they have with the evil Emperor of Japan. But when the plan goes awry and fellow ninja Hamasuke is captured, can Shianndrea overcome her lack of confidence and save him before it’s too late? Variant cover limited to 1,500 copies!

SCUM OF THE EARTH #2 (Bimonthly)

Now that True has been outed as more than a bourbon-fueled psycho killer, can he and his partner in crime Laura fend off an intergalactic bounty hunter? And just who is this alien hunter, and what’s his connection to True? Mind blowing cosmic revelations, guns, blood, and twists ahead!

Celebrating its first full year, SKYWARD is thrust into new lands with new peoples, creatures…and distractions? In the midst of a changing land, our heroes find that the Battle of Three Rivers was only the beginning of a brand new conflict! This issue also features a LIMITED Edition variant
cover (1500 copies) by DARWYN COOKE (Parker, DC’s New Frontier)!

When awkward high school teen Jasper Dixon conceals an injury sustained during a hunting excursion with his family, his infected wolf bite combined with the hormonal changes of puberty triggers a disturbing physical transformation. Now he’s forced to confront his Deep South upbringing and monsters far worse than what he’s become! Featuring a regular cover by Riley Rossmo (Drumhellar), and a Limited Edition (1500 copies) werewolf variant by Mehdi Cheggour (Enormous)!

As Zombie Tramp stirs up trouble in Sin City she catches the attention of its most legendary resident, The King! The problem is he “left the building” three decades ago–so what kind of undead monster sits on the throne now? It’s a buffet of all out high-stakes reanimated action! Also available in an alternate ‘risque’ cover limited to 2000 copies.