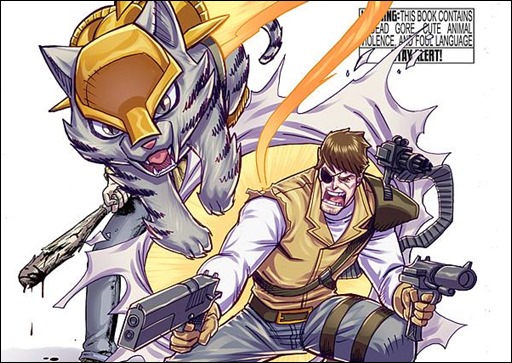 Here is the complete list of Action Lab Entertainment solicitations for the month of September 2014.

In the very near future, supernatural beings live among humans in peace, yet Jack Crimson finds his life as a werewolf frustrating, and wants nothing more than a cure. Desperate to free himself from this curse, he makes a series of decisions leading him down an unexpected path. Join Jack as he makes his way through this dark new world. Features a variant cover by Daniel Logan (Ghost Town), limited to 1,500 copies!

The stage is set. Tom Ferris, once little more than an office drone, is about to return to the man he once was. Side-by-side with masks and costumes, he has calculated a grand return to the limelight of his yesteryear. His entourage assembled, his target marked, his city is calling to him. It watches and waits for the black.

EHHM THEORY: EVERYTHING AND SMALL DOSES #1

Back on American soil, Jake settles into his normal life. But when the police attempt a violent takedown on a teen extrahuman, will Jake endanger that normal life and use his own powers to save the boy? Or will he keep quiet and abandon the youth to his grisly fate? Variant cover by Ray-Anthony Height (Midnight Tiger and Marvel’s: Fear Itself, Spider-Girl) limited to 1,500 copies!

Just as things are starting to get back to normal for Jack McGriskin and friends, a new shadow falls across their path… and lands squarely on Ramona! A mystery man stalks her through the streets of Boston, but is she his target or only a means to an end?

Gavin has to shake down an old friend for some intel, but may end up going too far. Unfortunately for Gavin, Powerstone and the Apollo Bay Police Department are on the hunt…and it’s Midnight Tiger season!

MISHKA AND THE SEA DEVIL HC

Eleven days trapped on a mysterious island. Eleven chapters drawn in eleven different styles. One incredible artist. After a chance encounter at sea, fisherman Mishka washes ashore on an uncharted island. Surrounded by monsters and worse, can Mishka survive long enough to solve the mystery of the Sea Devil and return home? Join her, Captain Furball and Admiral Ghost on the adventure of their lives!

After successfully completing her first mission, Shianndrea is allowed to accompany Kim on reconnaissance to New Tokyo in order to spy on the Azumi Ninja Clan. Things can’t be better! However, just when things are getting cozy between the two ninja, Ai joins the mission, making these three ninja a crowd.

SKYWARD VOL. 4: SINS OF THE FATHER

Jeremy Dale and Action Lab proudly present the fourth volume of the smash-hit, SKYWARD! In the wake of the Battle at Three Rivers, it’s certain that new alliances must be formed to withstand the armies of the Brother Kings. Enter: The Berserkers! Continuing the fantastic action-fantasy epic from CGS 2013 Breakthrough Creator and Harvey Award nominee Jeremy Dale (G.I. Joe, Marvel Kapow!), following the thrilling tale of Quinn and his dog, Jack– as we travel ever further into the strangeness of the unknown! Collects Skyward #10-12!

After revealing his involvement with the KKK, Jasper’s farther forces him to confront a bully from school through violent tactics. Refusing to participate, Jasper fleas the scene only to succumb to another “episode” as the beast inside of him resurfaces. Unable to fight it, Jasper suddenly finds himself in the middle of his town’s racial war. Featuring series covers by red-hot artist Riley Rossmo (Drumhellar)!

Zombie Tramp has fallen in with the wrong crowd in her adventure to Las Vegas… specifically, the undead clutches of the king of Sin City’s sex trade. Now she’s being forced to wed the jump-suited monster of a man in a private ceremony at the Grand Canyon! But in this unholy wedding, “Til death” is just the start. Features a “risqué” variant cover limited to 2,000 copies!