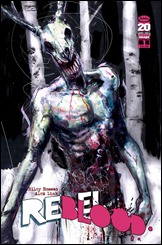 Rebel Blood is not only illustrated by Riley Rossmo, but this time he’s also sharing writing chores with his friend Alex Link. Just like in Green Wake, Rossmo’s art conveys a sense of surrealism mixed with reality. The story isn’t laid out in a traditional linear form, but takes us on a ride into the recent past, as well as into the imagination of our lead.

Chuck wants to save his family and his mind plays out the scenarios that may unfold when he gets there. Not all of them are happy, thanks to their recently strained relationship. The back and forth storytelling keeps us on our toes about what is actually being played out in reality, and what’s being manifested by Chuck’s imagination.

Right from the start, you can tell that this isn’t your traditional zombie fare. Mind you, there’s plenty of blood and gore in the story, but there’s also a nice dose of mental instability that adds just a hint of darkness to the tale.

If you enjoyed the Green Wake series by Kurtis J. Wiebe and Rossmo, you’ll enjoy Rebel Blood. I have a feeling that the ending will hold quite a surprise!