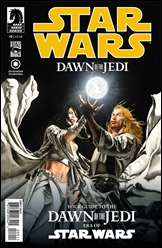 Title: “Your Guide To The Dawn Of The Jedi Era Of Star Wars”

The issue details the events and back story leading into Dawn of The Jedi. From the colonization of the Jedi home world, Tython and the Tythos system, to the technology created and used, to all of the key inhabitants of Tython and the surrounding worlds, the information that one would need to feel immersed in the story is all laid out here.

We’re introduced to the Je’daii – which later became Jedi – and their teachings. According to the book, Je’daii is “an amalgam of two ancient Dai Bendu words – je, meaning “mystic,” and daii, meaning “center” – signifying that the Je’daii concentrate their study on balance within the mystical energy they call the Force.”

Each page is contains informative text by John Ostrander and is accompanied by beautifully detailed images by Jan Duursema. The text and images flow easily together, making you feel as though you’re reading an intriguing historic tale and less like a text book. The layout of the book somewhat reminds me of a game manual, but reading this one is immensely more enjoyable.

Star Wars: Dawn of the Jedi #0, written by John Ostrander and drawn by Jan Duursema, features a cover by Rodolfo Migliari and is available at you local comic shop on Wednesday, February 1st, 2012. The issue has 32 full color pages for $3.50 US.