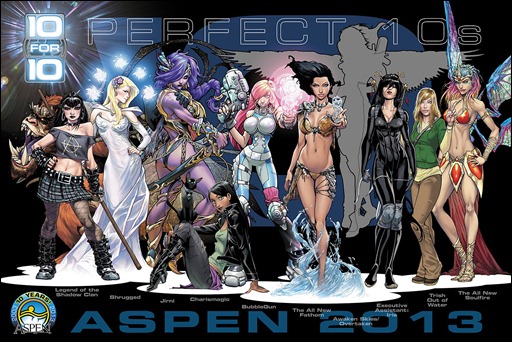 Take an incredible JIRNI with Aspen’s newest ‘10 for 10’ series debut!

Discover a whole new world of adventure! Trekking through a violent and dangerous frontier of savage barbarians, devious thieves, and wild creatures, a warrior-princess named Ara searches for her mother, who was stolen away from her kingdom by a mysterious sorcerer with the help of his powerful D’jinn.  What great and terrible secrets await her in the distant horizon? Prepare to experience an epic tale of fantasy and wonder without boundaries. This is Ara’s quest. This is Ara’s destiny. This is Ara’s – JIRNI.

After years of preparation, creator JT Krul is ready to take you on a JIRNI unlike any other! Accompanied by the incredible talents of artist Paolo Pantalena and colorist Brett Smith, prepare yourself for the ride of a lifetime and the premiere of 2013’s newest hit series!

You think you’re prepared, but you’re not. You’ve been decisive in your actions up to this point, but now things have been turned upside down. You feel you’ve conformed your mindset and are ready to accept what you’re about to experience, but you haven’t. That’s because SHRUGGED is back and ready to blow your mind!

An evil unlike any other has made its way back to Perspecta and he’s going to teach everyone there the true meaning of the word fear. Meanwhile, Theo’s troubles have only just begun as his new teacher isn’t quite what he seems and the recent arrival of Lou, the pretty girl on Theo’s track team, has the What If Mafia on overdrive. How can Ange hope to keep Theo’s focus on graduating, and how is it that Dev is screwing things up worse??

Created by Michael Turner and Frank Mastromauro, with illustrations by newcomer Jonathan Marks and colors by Beth Sotelo, make sure to listen to the voices inside your head and pick up a copy of SHRUGGED #2 today!

LEGEND OF THE SHADOWCLAN #3

What is the mystery of the LEGEND OF THE SHADOWCLAN?

When 17-year-old Brayden Arashi discovered that he and his siblings were part of an ancient and powerful ninja family called the Shadow Clan, he thought his troubles were over. A mediocre student and athlete with no hobbies to speak of, he was one of those people that just never did anything particularly well. But now, finally, he felt like he was part of something special. Unfortunately for Brayden and his family, their troubles are just beginning, because the Arashi had a deadly rival– the GHOST CLAN– a vicious and deadly group of ninja who’ve been searching for the Shadow Clan for centuries…and now they’ve found them!

Writer David Wohl is joined by the artistic talents of Cory Smith and colorist John Starr, as they bring to you the thrilling new adventures of the LEGEND OF THE SHADOWCLAN!

The Extinction finale has arrived!

In this, the final chapter of the thrilling Executive Extinction crossover, Iris seeks vengeance for her fallen comrade and forces a final showdown with the man who murdered them–the vicious and malevolent Mazutsu. But to get to him, she must cross paths with her own employer, the C.I.A., as well as her greatest nemesis, Rose, who is seeking a little revenge of her own. In the end, only one will survive, and THIS time, it’s permanent!

Can anyone hope to survive the final Extinction?

It is life or death for Executive Assistants Lily, Ivy and Aster as they attempt to fight their way out of an ambush at the hands of the traitor within their group! Mazutsu’s army of soldiers, led by Rose, have them surrounded, stacking the odds further against their favor! The pulse-pounding crossover “Executive Extinction” reaches its bloody conclusion within the pages of Assassins, and no Executive Assistant is guaranteed to survive!

When fourteen year-old Angie hears these simple words uttered from her aging grandfather’s lips, she has no idea that it will send her on a journey into a hidden world of magic born from childhood imagination – one that bonds each and every one of us to our own unique spark, a special talisman with wondrous powers. Like many over the years, Angie forgot about her spark, as her mind grew cluttered with the challenges of life, the stresses of school, and the tragic loss of her mother.

Now, Angie will need all her strength and courage as she rediscovers this world because there is a secret danger whispering in the shadows. Her grandfather was wrong. He didn’t lose his marbles. They were stolen from him, and if Angie isn’t careful, she could be next.

An adventurous tale of wonder, The Lost Spark celebrates the magic of childhood – the fantasy of imagination, the darkness of the unknown, and the beauty of friendship that knows no bounds. Prepare to enter a world both familiar and new, and one that you’ll never want to leave.

Aspen is proud to offer you the exclusive Hardcover version of Michael Turner’s Fathom vol 3: Worlds at War! Containing everything that was Fathom volume 3, this beautiful 284 page Hardcover is strictly limited to only 500 total copies produced. This is an absolute must for any Aspen, Fathom, Michael Turner, or comic book fan, period. Quantities are limited and allocations may occur so act fast!

The FATHOM VOL 3: WORLDS AT WAR – EXCLUSIVE HARDCOVER EDITION is in stores April 2013!