Aspen is planning to celebrate the publisher’s tenth anniversary this February in a big way, with their largest offering of new titles in their history.

Launching their special “10 for 10” initiative that will feature ten new series releases, one each month over the span of ten months. Aspen’s “10 for 10” will debut with the launch of Legend of the Shadow Clan #1 on February 6th, 2013. From creators David Wohl and Brad Foxhoven (Executive Assistant: Iris) and the art team of Cory Smith and John Starr (Broken Pieces, Fathom), Legend of the Shadow Clan marks Aspen’s first all new property of 2013. Below is the publisher’s solicitation for the new Aspen release:

Meet the Arashi family. They are like any other family living in the city: kids in school, parents working to make ends meet. But unbeknownst to even them, their ancestors held a dark secret: they were a clan of ninja in feudal Japan, in the employ of a prominent leader. But when that leader was murdered under mysterious circumstances, the Arashi Clan was blamed, and forced to flee, going into hiding. Over the centuries, the descendants lost track of the ancient ways. They came to America, abandoning their sordid past to distant memory. However, recently, their secret has been discovered–their ancient enemy has returned, and won’t rest until every member of the Arashi clan is killed. Now, the Arashi family must rediscover their long-forgotten birthright if they hope to have any chance of surviving the onslaught to come, and along the way, they will learn the LEGEND OF THE SHADOW CLAN.

To celebrate the first release of the “10 for 10” initiative and to thank fans and retailers for their support in getting Aspen Comics to the milestone decade mark, Aspen is releasing the first issue of Legend of the Shadow Clan for the highly affordable price of only $1. As well, every subsequent #1 issue for each new release in Aspen’s “10 for 10” program will be offered at the same low $1 price.

To help support comic shops’ push for Legend of the Shadow #1 and the Aspen “10 for 10” titles to follow, Aspen is offering a multitude of special incentives for stores to choose from on the debut issue, priced at a near Free Comic Book Day level to retailers:

Every fan or new reader who lets their local retailer know to add Legend of the Shadow Clan #1 to their subscription box is eligible to receive the special “Aspen Reserved Edition” cover for each “10 for 10” #1 title. Fans who collect all ten Reserved Edition covers at their local comic book store will then be eligible to receive the free Aspen “10 for 10” Jam Poster (to be revealed soon!) featuring characters from all ten titles and colored by superstar colorist Peter Steigerwald.

Any retailer who orders 50 copies of the $1 priced Legend of the Shadow Clan #1 will receive a signed and numbered copy of the direct cover edition, along with a certificate of authenticity.

Retailers who order 100 copies of the $1 priced issue one will receive the above listed incentive as well as one free CCG 9.8 edition of Legend of the Shadow Clan #1 Reserved Edition cover.

For every 250 total combined copies of the standard and Reserved Edition covers ordered, retailers will receive all of the above listed incentives and one free original hand drawn Sketch Cover by Legend of the Shadow Clan series artist Cory Smith.

Each retailer who orders 750 total combined copies of the standard and Reserved variant edition covers are eligible to receive those copies with an exclusive cover featuring their store logo or image incorporated into the cover illustration. Qualifying retailers will be contacted to confirm the specifics of your exclusive image. All prior listed incentives are also included at this level.

And for stores who order 1500 total combined copies of the standard and Reserved variant edition covers, those retailers will receive a special store signing appearance by a creator of Legend of the Shadow Clan, receive 200 additional past Aspen exclusive comics for the signing, and be included in an interior ad page of the comic promoting the event. Qualifying retailers will be contacted to confirm the specifics of your signing. This incentive is highly limited to the first five participating stores. All prior listed incentives are also included at this level.

For more information on Legend of the Shadow Clan and Aspen Comics please check www.aspencomics.com and www.aspenstore.com and follow Aspen’s “10 for 10” on Twitter with the hash tag: #Aspen10 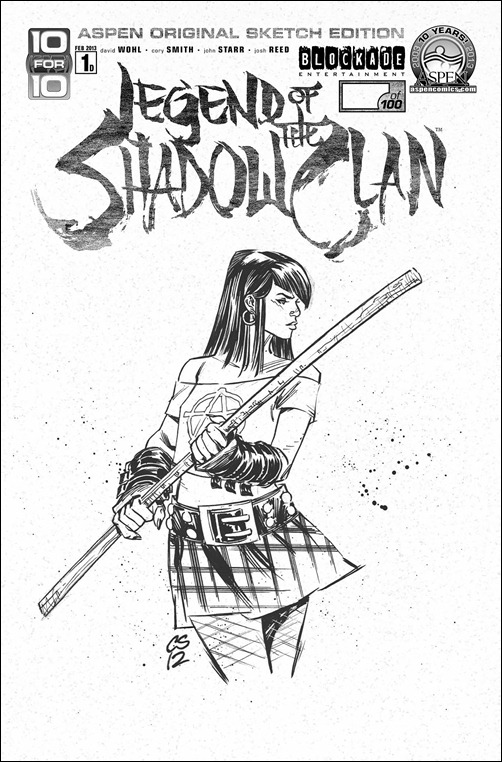 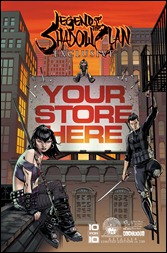 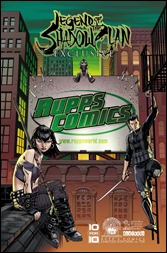 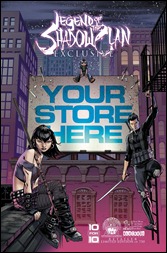