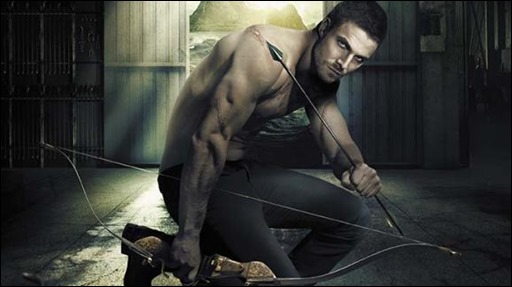 Here are the Beyond DC Comics – The New 52 Group solicitations for August 2013 courtesy of DC Comics. 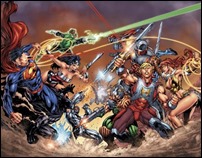 DC UNIVERSE VS. THE MASTERS OF THE UNIVERSE #1

After narrowly escaping his last battle with He-Man, Skeletor has fled to the most unexpected realm to recover: EARTH! Once there, he sets a plan in motion to siphon off Earth’s core magic. Forging an unlikely hunting party, He-Man and company go in search of Skeletor. Finding themselves at odds with the heroes of the DC Universe, He-Man and the Masters of the Universe must find a way to stop Skeletor and his mysterious new master!

This debut issue features two covers by Ed Benes, both available for ordering: one featuring the heroes of the DC Universe, and the other featuring The Masters of the Universe!

Join comics’ finest talents as they celebrate The Man of Steel himself: Superman! This issue features The Last Son of Krypton in timeless tales of truth and justice, featuring appearances by Lex Luthor and Brainiac! Plus: A meteor that’s headed straight for Earth!

From the sands of time and halls of higher learning comes one of Batman’s deadliest foes: King Tut! Tut returns to assert his royal status and challenge the Dynamic Duo with his most far-reaching plan yet to rule the modern Thebes, Gotham City! Also in this issue, doors smash in and jaws crack from the fists of the newest tough in town: introducing the 1966 incarnation of that reptilian rogue Killer Croc! How can Batman battle this brawny brute?

With a new curfew in effect, arrests for civil disobedience are taxing the prison system and the GCPD. With street crime still on the rise, Batman is coming up cold in his attempts to find Gotham City’s latest bizarre killer, but finds his hands full with petty thugs and corrupt officials.

“Earth In Crisis” heralds the beginning of the end of the world as the girls are whisked away to the planet Rann. There they are greeted by Adam Strange and Hawkgirl and told of the imminent threat of the evil Sinestra. It’s not just Rann in danger, but the universe itself!

INJUSTICE: GODS AMONG US #8

From the ashes of Metropolis comes Superman and the JLA’s newest ally: Lex Luthor! Against all odds, he’s not only survived but now embraces Superman’s goals. Of course, Lex has his own ideas for how to create a better world. The Man of Steel trusts him, but can the rest of his allies be so sure?

“Olympus,” part 1! Twenty years ago, a young boy washed up on a mysterious island and met a princess. Now, that princess has come to look for the mother who disappeared when she took the boy back. But if Smallville is prepared for strange beings, Washington, DC, certainly is not!

LEGENDS OF THE DARK KNIGHT #11

“What Happened Was…” When Calendar Man and Batman battle during a Gotham Knights game, things go very, very wrong. But with everyone in the crowd giving a different eyewitness account, will the GCPD even be able to figure out what happened?

Now a freshman at Gotham University, Terry McGinnis’s role as Batman threatens his education and his life as a teenager. And when the Mayor is murdered, Terry’s life is thrown into even greater turmoil! Meanwhile, the Justice League must stop Superman when his powers rage out of control!

Art and cover by SCOTT GROSS

Much has been made of the famed magician and escape artist Harry Houdini, but less is known of his diminutive waterfowl understudy, The Great Houducky. This is his story. It’s also a Daffy tale of derring-do, escape and adventure!

Art and cover by FABIO LAGUNA

Terry the Terror is terrorizing the pit crew at the big races! Will Scooby and the gang figure out what this monstrous apparition wants…or will their day at the races end in disaster?

Art and cover by DUSTIN NGUYEN

April showers bring…Mr. Freeze? When Victor is granted his freedom from Arkham Asylum, he is welcomed back into Gotham City. But that will quickly turn into a cold reception if Batman can’t stop his latest scheme. And then, it’s Cinco de Madness as Damian and friends take their battle to the seedy underworld of street racing, cage wrestling and back alley taco-eating competitions! Will Batman arrive before the horchata overflows on our Gotham City boys and girls?

Written and illustrated by THE USUAL GANG OF IDIOTS

Feeling the heat this summer? Why not cool down with a brisk, refreshing MAD?

HE-MAN AND THE MASTERS OF THE UNIVERSE #5

Despara’s origin revealed! Plus, Hordak tells a shocking story that will change her world forever!

In this original graphic novel published in a landscape format, meet the Pandaren, one of the most beloved (and mysterious) races in World of Warcraft! The tale introduces Li Li Stormstout, a precocious young student who lives atop a giant turtle called Shen-zin Su. Like the rest of the wandering island’s pandaren, Li Li comes from a line of adventurers who left their homeland long ago to explore the world…and she wants nothing more than to chase that dream. But when Li Li runs away to find her famous uncle Chen, how will she survive Azeroth’s perils?