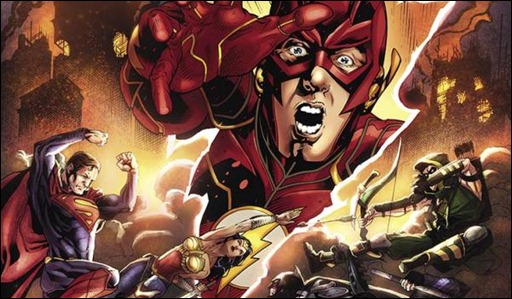 Here are the Beyond DC Comics – The New 52 Group solicitations for May 2013 courtesy of DC Comics.

Art and cover by PAUL CHADWICK

Harlan Ellison, science fiction’s brightest luminary, has joined forces with multi-award-winning artist Paul Chadwick, creator of Concrete, to bring you 7 AGAINST CHAOS, a graphic novel that is singular, powerful and unpredictable. This extraordinary odyssey of mystery and adventure will take you to the rim of reality and beyond.

In a distant future, Earth is in grave danger: The fabric of reality itself is unraveling, leading to catastrophic natural disasters, displaced souls appearing from bygone eras, and sudden, shocking cases of spontaneous combustion. The only hope for Earth’s survival is a force of seven warriors, each with his or her special abilities. But can these alien Seven Samurai learn to get along in time to find the source of the gathering chaos and save all of reality?

Don’t miss the debut of this all-new, digital-first series starring The Man of Tomorrow, written and illustrated by some of comics’ finest talents!

Journey into Superman’s past in a tale written by acclaimed Ender’s Game author Orson Scott Card and Aaron Johnston, with art by TOM STRONG’s Chris Sprouse and Karl Story! Plus, witness Superman’s first encounter with the work of Lex Luthor, brought to you by Jeff Parker (Hulk) and Chris Samnee (Daredevil)!

Deathstroke’s origin revealed! You do not want to miss this! Plus: The Arrow pairs up with a familiar face to stop a madman with a Robin Hood complex, and when Oliver and Diggle get carjacked, they’re forced to take down the criminals using unconventional means.

Introducing Jade, the Green Lantern of the Ame-Comi Universe! But can she stop the new villain known as the Flying Guillotine? Plus: Power Girl goes head-to-head with Star Sapphire!

Based on the hit videogame Batman: Arkham City! In this issue, learn about Batman’s relationship with Talia al Ghul before the events of Arkham City! But what is the purpose of Talia’s surprise appearance at Bruce Wayne’s speaking engagement…in Metropolis?

In “Batman Beyond,” Terry squares off against the sinister Shriek, while Max uncovers the shocking truth about Undercloud. Plus: The Justice League continues the search for Kai-Ro, and you won’t believe who’s coming to the rescue in “Superman Beyond”!

LEGENDS OF THE DARK KNIGHT #8

In “Carved,” the new crime wave in Gotham City is stranger than ever. Will Batman solve the puzzle in time to save the citizens’ lives? Plus: The Dark Knight’s investigation into a missing mythological creature created by taxidermy takes a turn for the even more bizarre when he stumbles onto a living version of the creature in “Unnatural Selection!”

Written by B. CLAY MOORE

Art and cover by TONY HARRIS

Dr. Hellman’s escaped experiment gains our sympathy, and John Singleton, the sixth Skull, is still in need of a rescue. Will his successor complete the job in Switzerland in time to lend a hand? The miniseries comes to its epic conclusion here!

Detective John Jones, the Martian Manhunter, steps into the Smallville spotlight in “Effigy,” a stand-alone adventure! A grisly murder in Gotham City sends Martian Manhunter on a quest to confront his past. Guest-starring Batman and Nightwing!

An all-new episode begins with “Argo” part 1 of 3! Superman and the Legion of Super-Heroes try to stop war between Earth and a shocking enemy! Plus, a glitch in Booster Gold’s Legion flight ring propels the “Gold Standard,” his trusty robot Skeets and The Man of Steel into the 31st century.

Art and cover by DUSTIN NGUYEN

In the second issue of the new, digital-first series, the search for a missing holiday choir leads Batman and Nightwing into a confrontation with Mr. Freeze! But in this heartfelt Christmas tale, the frozen fiend’s motives aren’t as nefarious as they seem…

And on a festive New Year’s Eve, Catwoman thinks she’ll be spending a quiet night at home, contemplating her New Year’s resolutions—until Poison Ivy and Harley Quinn show up, that is!

Art and cover by DARIO BRIZUELA

The Interceptor crew visits an old friend for the intergalactic Aftel Cup Race! Hal puts his friend’s car through its paces as a mysterious competitor helps him out—and why is Lobo determined to stop him?

Art and cover by ROBERT POPE and SCOTT McRAE

Heavy metal rock band “Smooch” is scared silly when the ghost of Johnny B. Badd shows up and puts on a show-stopping performance! Can Mystery Inc. crack the case and bring back the music?

Art and cover by FEDERICO DALLOCCHIO

The action in Manhattan heats up as Cindy Ford attempts a rescue mission and John Ravane battles the Insurgent Leader. And as President Chong looks on in horror, his secret machinations are revealed! When Ravane makes his final choice, will anyone be left standing?

HE-MAN AND THE MASTERS OF THE UNIVERSE #2

In the second issue of the new, ongoing series, Hordak’s forces have invaded Eternia, and Despara’s identity is revealed! But what is her relationship to He-Man? And will he be able to stop her from killing everyone he loves?

MASTERS OF THE UNIVERSE: THE ORIGIN OF HORDAK #1

Art and cover by KEITH GIFFEN and SCOTT KOBLISH

How does one go about becoming a demigod? And, what the heck is a demigod anyway? These questions and more will be answered in MASTERS OF THE UNIVERSE: THE ORIGIN OF HORDAK! Travel to the distant past and learn how the old gods died and how Hordak went from being a conquerer of the cosmos to something very like a god.

INJUSTICE: GODS AMONG US #5

Based on the upcoming DC fighting game from NetherRealm Studios, creators of Mortal Kombat! Batman has two allies: Damian and Dick Grayson. One is with him, while the other has joined Superman’s cause. The conflict between The Dark Knight and The Man of Steel is about to turn very personal. Plus: The Flash travels to Australia and ponders his own allegiances.