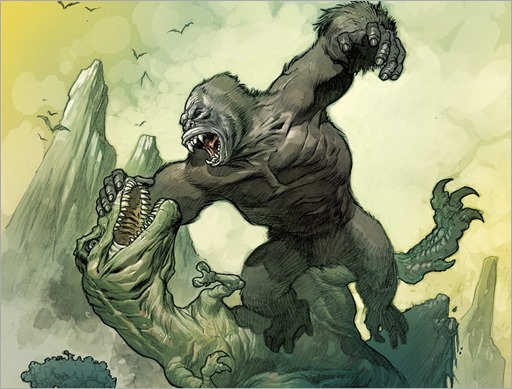 BOOM! Studios has released their complete list of solicitations for items shipping in July 2016.

Have a look and let us know what you think.

King Kong, world-famous and original gargantuan ape, is the progenitor of an entire genre,spawning sequels, remakes, and countless other interpretations. You know Kong. You love Kong!

Two fractured and combative civilizations are forced to band together as they venture onto Skull Island—their new home—and are horrified to discover it is populated by dinosaurs, giant creatures…and Kongs.

Justin Jordan (John Flood, Spread) tackles a provocative topic—the violent drug cartels of Mexico—partnering with artist Raúl Treviño, who lives in Mexico and is drawing on his first-hand experiences to inform the story.

A DEA agent, who disappeared in Mexico years ago, has resurfaced and is now out-brutalizing some of the cartels he was sent to investigate. His daughter has been tasked with stopping him…by any means necessary.

Perfect for fans of Scalped, the novels Heart of Darkness and Savages, or the film Apocalypse Now.

Oh My Glob! We’ve unleashed some of the industry’s best cartoonists loose in the Land of Ooo to share their most algebraic stories in their own voices!

The first issue is so math thanks to Katie Cook (My Little Pony: Friendship is Magic), Tony Millionaire (Sock Monkey), and Art Baltazar (Patrick the Wolf Boy). You’re lumping welcome!

Stories include Garfield venturing out as a Nighttime Crusader, fighting his own impulse control, and going up against “The Most Annoying Cat in the World.” Plus, Nermal is seeing double—does he have a twin he never knew about?!

After five years and 39 issues, four original graphic novels, and a groundbreaking tribute book, we bid farewell to this incarnation of Peanuts comics with an oversized finale.

Snoopy’s Daisy Hill Farm is being torn down and Charlie Brown tries to be there for him. It’s a warm goodbye filled with love and heart for all devoted Peanuts readers!

Lucas is sent back to 1943 Occupied France to kill a demon, but must avoid altering history in the process.

As Professor Brownfield gains greater influence over Heller, Heller’s obsession with “correcting” New York only grows, terrifying his loved ones.

Reeling from an unexpected betrayal, Kimberly must work with old and new friends to free her loved ones from Goldar’s clutches.

As Sid and Frankie hunt down a lead, Sid does a little digging in secret from the Weavers.

Now an ongoing series! Dewydd and Catrin explain their pasts to Uma, who might have to continue the joyride on her own.

Guest artist issue! Thony Silas (Venom) and Kyle Higgins, the team behind Batman Beyond 2.0, join forces again for a special one-shot focusing on the Ranger that Rita approached before finding Tommy—Zack!

Final issue! Klaus must not only save Yuletime, but the town of Grimsvig itself from the evil Krampus and Lord Magnus.

Sacrifices will be made, and not everyone will live to see tomorrow.

OVER THE GARDEN WALL #4

Greg tries to stop a man from cutting down all the trees for his enormous treehouse, while Anna has to deal with her mother’s ghost and the disappearance of her friend.

New story arc! When Benson’s had enough and ditches the Park, Mordecai and Rigby accidentally start the Apocalypse in his absence.

Finn and Jake are sheriff and deputy of a wild west town…or are they? Is this even real?!

What the junk—Jen is missing?! The Lumberjanes and Gotham Academy crew regroup at camp to figure out how to find their missing friends.

Goldie discovers the truth behind Ludwig’s disappearance, but will she be able to find him before someone else does?

Daisy has to draw on new reserves of inner strength after she loses control of a party of prospective students on an open day, while the “lonely, unlovable spinster” Susan tries dating again with disastrous results.

The Roanoke cabin has a heart-to-heart with the Zodiac cabin before going to save the High Council.

Divorce is always a tricky subject, more so when you’re one of the wealthiest geniuses in the modern world.

The definitive art collection of the quintessential artist’s artist, perfect for fans of the craft.

Series conclusion! Following the shocking death in Volume 2, Lucifer has become the Keeper of Secrets and sets out to kill Madam Cymbaline once and for all. Raina and Bob aren’t going to give up on Lucifer’s humanity, though, and set out to save her with help from the most unexpected source—the now-human Harlot. Collects issues #9-12.

After all the trouble of escaping New York, Snake Plissken will have to sneak back into the city to get revenge on the President. But new forces have gained power in Manhattan since Snake was last there, making this mission more dangerous than ever. Collects issues #9-12.

Features the adaptation of Clive Barker’s original screenplay; year 1 of the original ’90s Nightbreed Epic comic run; and the Hellraiser/Nightbreed crossover, all remastered and collected for the first time.

First appearing in the cult classic 1990 film, the Nightbreed is a tribe of monsters and outcasts who hide out from society in an underground community called Midian.

It’s Garfield like you’ve never seen him before. Garfield: His 9 Lives went from illustrated book to beloved animated special, and now you can see the different lives of Garfield throughout history in comics for the first time, drawn by an all-star cast of artists including Roger Langridge, Brittney Williams, Andy Hirsch, Genevieve FT, Frazer Irving, and more. Collects issues #33-36.

Celebrate the best of childhood with Cartoon Network’s Clarence, the story of an optimistic, spirited, lovable boy in the 4th grade who sees the best in all things and wants to try everything—because everything is amazing!

Clarence, Jeff, and Sumo have lot to learn about worms when a fishing trip goes sideways for these friends.

Following Witches, this is our second in a themed series of Jim Henson’s The Storyteller tales, this time centered around dragons.

Includes four tales of dragons, inspired by folklore from around the world and told in the spirit of Jim Henson’s beloved television series.

Collects the complete limited series and also includes an exclusive behind-the-scenes look at the process and care taken in adapting each of these timeless legends.

Includes behind-the-scenes material and an extensive guide that draws parallels between the original text and this wholly unique interpretation.

The three fates—Riata, Cait, and Smertae—have always been guiding and protecting Scotland unseen. When there is a disagreement between the sisters, Riata and Smertae will use men as pawns, and Smertae will direct Macbeth to a crown he was never meant to have.

Based on the immensely popular card game, Munchkin comes to comics! Taking place in a very flexible mashup of genres, Munchkin collects stories from the world of the fantasy roleplaying satire. What do Munchkins do? They play for the win. They are rules lawyers. They backstab. They gloat. They whine when someone else backstabs or gloats. Collects issues #9-12.