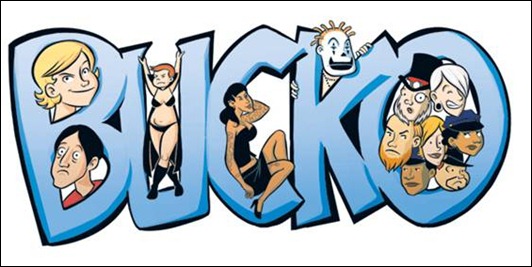 Written by twisted masterminds Jeff Parker (Thunderbolts, Mysterius the Unfathomable) and Erika Moen (DAR), this collection includes tons of extras, including brand-new strips, commentary, and info on the real-life inspirations for Bucko.

“My main discovery in working on Bucko is finding out that many people are fascinated by the same weird mess that Erika and I are. And that nothing is off limits when it comes to humor and story if you pedal into it full steam with no hand brakes like we did,” said Jeff Parker.

After discovering a dead body in an office bathroom, hung-over job interviewee Rich “Bucko” Richardson becomes suspected of the murder. What he thinks is a quest to find the real killer turns into a weeklong romp through the wilds of Portland, Oregon, complete with bike-mounted cover bands, steampunk Makers, Juggalos, SuicideGirls, meth heads, so much absinthe, and an entire city made of books. After taking the Internet by storm, Parker and Moen’s dirty, funny murder mystery is now the most hilarious book in comic shops!

“This was a really unique collaboration, in that Parker would only give me one page of script at a time, so as the artist I had no idea which characters were going to stick around or what was coming up in the story next. I was reading this story with the same surprise as our audience,” stated  Erika Moen. “If you are looking for something irreverent, something tastefully obscene, something that pokes fun at sacred alterna-culture cows, then it is possible you will like this. But you might not. That’s cool too.”