The Future of CABLE AND X-FORCE
Is Marvel NOW!

Superstars Dennis Hopeless & Salvador Larroca
Battle The Threats No One Else Can!

This December, the deadliest mutant team of all debuts in Cable And X-Force #1, beginning the all-new ongoing series from rising star creators Dennis Hopeless (X-Men: Season One) and Salvador Larroca (Invincible Iron Man). As part of Marvel NOW!, Cable And X-Force joins a number of titles that will take the Marvel Universe in an exciting all-new direction, as the industry’s top creators join the top Super Heroes to deliver all-new ongoing series, great for new and lapsed readers alike!

Cable is back NOW! He has a new X-Force consisting of Colossus, Forge, Domino and Dr. Nemesis and they are all caught red-handed at the scene of a terrorist attack on a major American corporation whose CEO has expressed anti-mutant views. Now Cable and X-Force are on the run, with the Uncanny Avengers in hot pursuit.

“The X-Force that Cable’s leading is a group of outlaws trying to save the world,” explained Dennis Hopeless in an interview with Marvel.com. “They’re fugitives being chased across the globe and doing what good they can while always looking back over their shoulders. There’s not much room for error on this team.”

Marvel NOW! is the culmination of Marvel ReEvolution, the groundbreaking new initiative to evolve the comic book experience through innovation. With Cable And X-Force, Marvel NOW! ensures fans will find out just what it takes to be a hero when everyone thinks you’re the villain!

“We knew the return of Cable had to be big and this is going to be one of the most explosive Marvel NOW! launches, " said Axel Alonso, Editor in Chief, Marvel Entertainment.  “Dennis and Salvador are bringing a new look and feel to the X-Force, with a story that hearkens back to the core themes that made them such a phenomenon while moving them forward in an exciting way.”

Each issue of Cable And X-Force includes a code for a free digital copy on the Marvel Comics app for iOS and Android devices. Additionally, each issue of Cable And X-Force features special augmented reality content available exclusive through the Marvel AR app – including cover recaps, behind the scenes features and more that add value to your reading experience at no additional cost.

An all-new series! All-new team! All-new enemies! This is Cable And X-Force NOW!

This December, Dennis Hopeless and Salvador Larroca bring the war to Cable And X-Force!

CABLE AND X-FORCE #1
Written by DENNIS HOPELESS
Art & Cover by SALVADOR LARROCA
ON SALE THIS DECEMBER! 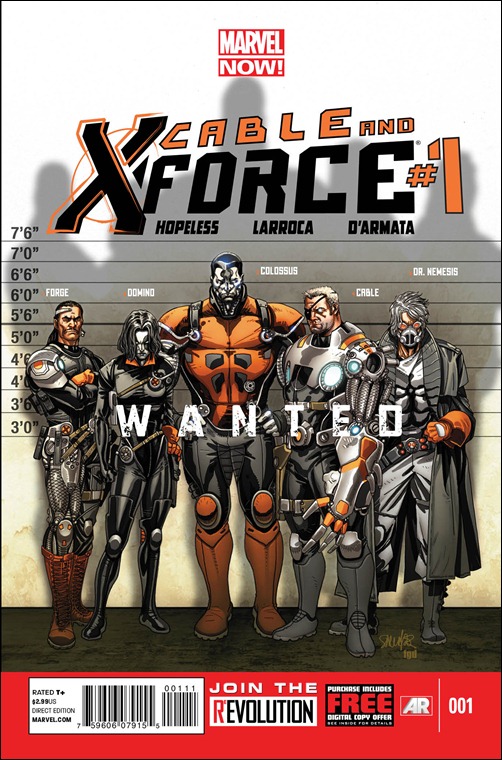