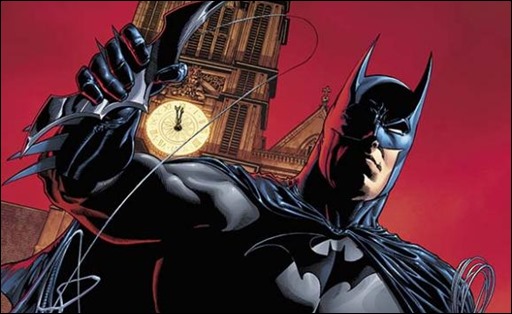 Here are the Collected Editions Group solicitations for August 2013 courtesy of DC Comics.

THE JOKER: DEATH OF THE FAMILY HC

Batgirl stars in these epics from #14-19 of her monthly series, plus BATMAN #17, BATGIRL ANNUAL #1 and a story from YOUNG ROMANCE #1, all spinning out of “Death of the Family.” The Joker is back, and Barbara Gordon must confront her past as she deals with the crazed criminal responsible for crippling her. Plus, once the dust settles, Barbara must deal with her family demons as her psychotic brother James Jr. comes after her.

These new tales of Batman explore unusual sides of The Dark Knight, including his early years as a crimefighter, his method of dealing with super-powered foes and more. Collecting issues #1-5 of the digital-first series.

Art and cover by ANDY KUBERT

DC collects the Batman stories by acclaimed artist Andy Kubert in pencil form in this spectacular new hardcover, including the tales that introduced Damian Wayne and the now-classic story “Whatever Happened to The Caped Crusader?” Don’t miss these stories from BATMAN #655-658, 664-666, 686 and 700, BATMAN (New 52) #18, DETECTIVE COMICS #853 and a story from 52 #46

In this new trade paperback collecting issues #7-12 of the smash-hit series, find out what who has joined the team after its origin! And why does Green Arrow want to join their ranks so badly? Plus, someone is out to get the Justice League, and he is determined to show the world how mortal these godlike beings really are!

The universe is in shambles and the Guardians are the cause. Their mysterious Third Army has risen across the cosmos like a plague, destroying everything in its path, and Hal Jordan and Sinestro are nowhere to be found. It is up to wrongfully accused Simon Baz to clear his name and become the hero that the Corps needs to get to the bottom of Hal and Sinestro’s disappearance and the Rise of the Third Army in these stories from GREEN LANTERN #0 and 13-20!

Art and cover by FRANK QUITELY

The amazing original graphic novel from the ALL-STAR SUPERMAN creative team of writer Grant Morrison and artist Frank Quitely is back in a new deluxe edition hardcover, that includes a gallery of preliminary art that’s never been published before! Ultraman, Owlman, Power Ring, and Johnny Quick rule their world without mercy or opposition, until the sudden appearance of Superman, Batman and the rest of the Justice League! Realties clash as the Justice League travels to an alternate reality to face off against distorted mirror images of themselves…

Spinning out of the hit CW television series ARROW comes these digital-first adventures! These new stories from ARROW #1-6 and #1 SPECIAL EDITION fill in the gaps between episodes of one of TV’s hottest new series!

Don’t miss a moment of the action from the 2012 5-issue miniseries as Wonder Woman must stop an attack on Themyscira, Batgirl falls into Duela Dent’s trap, Supergirl and Power Girl confront a space invasion and much more!

In this title collecting GA #0 and 14-16, plus THE SAVAGE HAWKMAN #14 and JUSTICE LEAGUE #8, Oliver Queen crosses paths with both Hawkman and the entire Justice League! As if that’s not enough, he must liberate Seattle’s waterfront from the grip of Harrow, a thug who’s running guns into the city! Also, Green Arrow’s downward spiral begins as he loses Q-Corps, and discover the events that led up to the birth of Green Arrow in a tale from issue #0!

In these stories from EARTH 2 #0 and 7-12 and a story from DC UNIVERSE PRESENTS #0, the World Army has begun rounding up the Super Heroes of Earth 2, but for what dark purpose? In an attempt to avoid capture, Dr. Fate and Kid Flash find themselves in the powerful magical realm of Nabu, and Wotan, the protector of Nabu, seeks Dr. Fate’s assistance in obtaining a secret locked deep within a tower…

The world has fallen to the Rot! Animal Man forms an uneasy alliance with Swamp Thing as the world falls deep into decay. The two heroes travel the decimated planet, scrounging up misfit crimefighters, whose appearances and histories have been changed by this new hell-scape. Will Animal Man and Swamp Thing be able to stop the forces of the Rot and change the world back to what it was? Find out in these tales from ANIMAL MAN #12-17 and SWAMP THING #12 and 17-18.

In these tales from BATWOMAN #6-11, six lives are inextricably linked in the past and present and on a collision course with the others: Batwoman, fighting for duty and vengeance against a threat of arcane power. Detective Maggie Sawyer, investigating a case that could end her career. DEO Agent Cameron Chase, commanding a vigilante she despises. Colonel Jacob Kane, clutching at a life that’s slipping away. Maro, a new villain corrupting Gotham City. And Kate Kane, wrestling with decisions that will test her loyalties.

NECESSARY EVIL: THE VILLAINS OF THE DC UNIVERSE TP

Written by GERRY CONWAY, PAUL LEVITZ and others

Cover by WILL CONRAD

Henry Tanner returns to destroy Stormwatch from within in these stories from STORMWATCH #0 and 13-18! When Apollo and Midnighter go missing, one of the Shadow Lords reveals a mystery, one that will shock the team to its core! And when Etrigan finds himself in modern times, Stormwatch will be put to the test and brought to the breaking point.

In this new trade paperback collecting issues #7-12, Wonder Woman goes to hell! After playing Poseidon, Hades, and Hera against each other, Hades strikes back by kidnapping Zola and trapping her in the Underworld. It’s up to Wonder Woman — with a little help from the God of Love and the God of Smiths — to break Zola out. But what is Hades’ real game? And once you get into the land of the dead, how exactly do you get out?