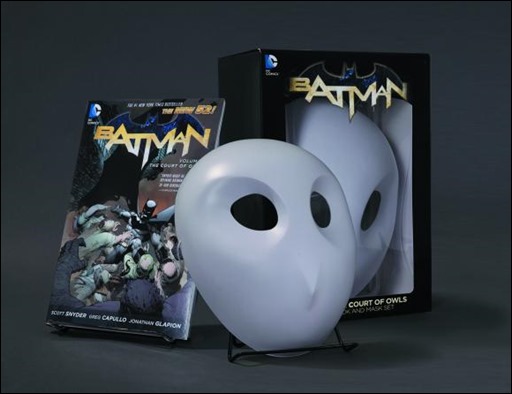 Here are the Collected Editions Group solicitations for July 2013 courtesy of DC Comics.

As a young performer with Haly’s Circus, Calvin Rose was secretly being raised to be a master assassin—a killing machine called a Talon. But when Rose defects from the Court of Owls’ ranks, he is marked for death! Now, Rose returns to Gotham City following the horrors of “The Night of Owls” to investigate what remains of the Court—but will he be able to gain his freedom at last? Collecting TALON #0-7!

After having his face sliced off, The Joker makes his horrifying return to Gotham City in this epic from issues #13-17 that shook Batman to his core! But even for a man who’s committed a lifetime of murder, he’s more dangerous than ever before. How can Batman protect his city and those he’s closest to?

This new hardcover features an acetate dust jacket showcasing the face of The Joker as it appeared on the die-cut covers of the “Death of the Family” comics — and under that dust jacket lies the horror that is The Joker’s skinless skull!

RETAILERS, PLEASE NOTE: This acetate cover will be available only on the first printing of this title.

Art and cover by GARY FRANK

The World’s Mightiest Mortal is reborn in The New 52 in this incredible tale from JUSTICE LEAGUE #7-11, 0, 14-16 and 18-21! Young orphan Billy Batson has bounced from foster home to foster home, but when he’s drawn to the Rock of Eternity, he is imbued with powers beyond those of any mortal man! But can he learn how to handle those powers in time to defeat the villainous Black Adam?

In this sea-splashed epic from JUSTICE LEAGUE #13-17 and AQUAMAN #15-16, Atlantis is struck by a U.S. Navy missile gone awry, and Ocean Master leads the undersea city’s forces in an attack on the east coast of the United States! The Justice League must turn back the tide, but they are woefully overmatched by the Atlantean Army! How can they save the world from annihilation?

Art by DOUG MAHNKE, CHRISTIAN ALAMY and others

BATMAN: THE COURT OF OWLS BOOK AND MASK SET

Art by GREG CAPULLO and

The best-selling epic that introduced Gotham City’s dread Court of Owls is back in this amazing book and mask set! Along with a trade paperback copy of THE COURT OF OWLS, collecting BATMAN #1-7, this set includes the PVC Owl mask with white elastic band that created a sensation at comics conventions in 2012!

This concluding collection, featuring issues #0 and 7-12, begins to answer the questions surrounding Captain Atom’s origin: Why did he sign up for Megala’s experiment? How did he become Captain Atom? Do his powers have any limits? Plus, Nate struggles to relate to those around him as he searches for a way to regain his human form and stop a catastrophic event!

Written by TOM DeFALCO • Art by AARON KUDER, PETE WOODS and others • Cover by TYLER KIRKHAM and BATT

In this title collecting issues #0 and 8-16, Rose Wilson and The Ravagers set their sights on the Legionnaires in the event known as The Culling! Plus, the Legionnaires must face Metamerican and his Metamarines!

Art and cover by FRANCIS MANAPUL

In this new paperback collection starring The Flash, Mob Rule wages a campaign of crime across Central City, plunging the city into darkness! The only way The Flash can save his city is to make his brain function even faster than before – but as much as it helps him, it also comes at a steep price. Collecting issues #1-8 of the monthly series!

In these stories from issues #0 and #13-18, a terrible betrayal forces Wonder Woman to make a deal with the gods who want her dead, and her “family” grows larger than she could have imagined. Will the mysterious Orion help Wonder Woman rescue Zola’s baby from the clutches of Hermes, or does he have darker intentions?

Batwoman’s search for Medusa brings her together with Wonder Woman in these stories from issues #12-17 and #0, but even this team might not be enough to bring down the mythological monster, as Bones, the DEO, Abbot and the Religion of Crime all descend on Gotham City to take part in the fight.

Inspired by the best-selling videogame Batman: Arkham City, these tales from issues #1-5 feature the evil of Hugo Strange, Harley Quinn, The Joker, Mr. Freeze, The Penguin, Hammer and Sickle and more!

In these tales from SWORD OF SORCERY #0-8, Amethyst, lost princess of Gemworld, is back—and she has powerful enemies hunting her! But what role will John Constantine play in her destiny? Plus, don’t miss tales of Beowulf and Stalker!

Written by JAMES ROBINSON, DAN DIDIO and others • Art by

BERNARD CHANG, KEITH GIFFEN and others • Cover by RYAN SOOK

Kass Sage, daughter of Vandal Savage, is an FBI profiler—and when she’s on the trail of a serial killer, she must seek her father’s help to put an end to the killings. Also, don’t miss tales of Kid Flash, Hawk and Dove, O.M.A.C. and more in this title collecting DCU PRESENTS #0 and 9-12!

In this collection of issues #5-8, Superman discovers a vigilante in Metropolis on the trail of a killer—and this mysterious Batman will stop at nothing to find his parents’ killer, even if it puts him on a collision course with The Man of Steel!

Witness the debut of O.M.A.C. in this paperback collecting all eight issues of the legendary 1970s series! Meet corporate nobody Buddy Blank, who is changed by a satellite called Brother Eye into the superpowered O.M.A.C. (One Man Army Corps). Enlisted by the Global Peace Agency, O.M.A.C. battles the forces of conformity!

In these stories from THE BRAVE AND THE BOLD #123-145 and 147-151, Batman teams up with The Flash, Aquaman, Mister Miracle, Green Arrow, Wonder Woman, Deadman, Green Lantern, Hawkman, The Phantom Stranger, Supergirl, the Teen Titans—and Jim Aparo himself!

Written by MARV WOLFMAN and others • Art by CHUCK PATTON, ERIK LARSEN, TOM MANDRAKE and others • Cover by GIL KANE

In these classic tales from SECRET ORIGINS #13 and ACTION COMICS WEEKLY #613-618 and 627-634, Nightwing teams up with his old friend Speedy as they hunt the villain Cheshire and Roy’s daughter, but Speedy has a secret Nightwing doesn’t suspect.