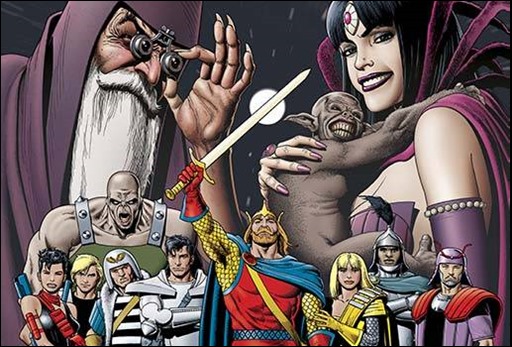 Here are the Collected Editions solicitations for June 2013 courtesy of DC Comics.

Collecting issues #0, 7-13 and ANNUAL #1! As vampires across the world attack anything with a pulse, Madame Xanadu mobilizes the team to intervene. But everything they know about how to slay a vampire is useless in this strange new world.

The New Guardians struggle with their new mission and battle the evil of Invictus in this title collecting GREEN LANTERN: NEW GUARDIANS #1-7!

The top teen heroes of the 1960s return in this volume collecting TEEN TITANS #6-20 and THE BRAVE AND THE BOLD #83, as the Titans take on The Mad Mod, Captain Rumble and The Scorcher!

Batman battles the Scarecrow and Bane in this title collecting BATMAN: THE DARK KNIGHT #1-9, and delves into the mystery of The White Rabbit!

The Rogues Gallery is united for the first time in The New 52 in this title collecting issues #0, 9-12 and THE FLASH ANNUAL #1! Who is behind their sudden organization, and why are they after their Captain Cold?

In this collection of issues #8-12 and 0, Dick Grayson must face a deadly adversary as he learns of his connection to the mysterious Court of Owls. But even if he can stop an undead assassin, he’ll still have to deal with an anti-Gotham City army—and the mysterious Paragon.

In stories from TEAM 7 #0-7, Team 7 follows the deadly team as they travel into the Heart of Darkness to battle the evil Black Diamond. The dark secrets of The New 52 are found here including the secret origin of Eclipso and the beginning of the Black Room from Justice League.

The last daughter of Krypton has a friend: a young woman name Siobhan. Too bad she carries the curse of the Silver Banshee—and Siobhan’s father, the Black Banshee, isn’t far behind! Don’t miss these stories from SUPERGIRL #0 and 8-12!

Explore the history of Krypton and the origins of The Phantom Zone, Krypton’s otherdimensional prison, in this new title that collects PHANTOM ZONE #1-4 and DC COMICS PRESENTS #97.

The classic tale that exploded into comics shops in the early 1980s is back in a new trade paperback collecting the entire 12-issue maxiseries! Featuring a cover by acclaimed artist Brian Bolland, this collection of the mythical tale of honor and bravery includes preliminary artwork by Bolland and developmental material from Mike W. Barr!