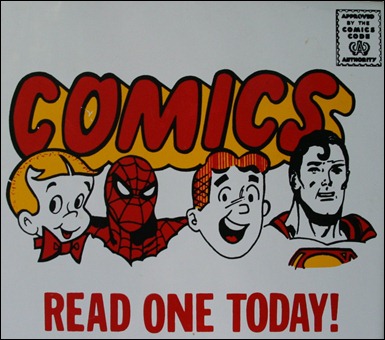 The Direct Market Needs An Alternative

DC Comics have done a good job at getting the word out about their NEW 52 relaunch and subsequently have gotten more people interested in comic books. Hopefully this can translate not only into long term readers for them, but can increase the general readership across the entire industry.

But there is one hurdle that I think the industry should be poised to overcome. That hurdle, the Direct Market, can often stifle as many sales as it creates.

If you want to buy a comic book right now, you have to go to a comic book shop to find one. This might be fine if you live in a major metropolitan area, but if you’re not, you might have to travel quite a distance to find one. You have to go out of your way with the sole purpose of buying comics. This defeats the idea of casual sales or impulse buys.

When I bought my first comic book, I did so at a small local bookstore. I don’t think the place was bigger than 400 sq. feet. They had their comics up front by the register on wire racks and a spinner rack by the door.  I would sometimes spend a long while looking through them when I went there to buy actual books. The condition didn’t matter to me, I was new to comics – all that mattered was if it looked like I would like it or it had a cool cover.

They carried just about all the DC and Marvel comics that came out, and a handful of others, like First and Eclipse, but not much. They also had a handful of TPBs (which were new at the time) and whatever Marvel Graphic Novels were in print at the time (like the Death of Captain Marvel and The New Mutants). They were a book store, not a comics shop, but they did have a good selection for the very little room dedicated to comics. I found out later that they carried a wide variety of comics because they could return what they didn’t sell.

The Direct Market was originally supposed to allow stores to purchase directly from the publishers and doesn’t allow for returns on merchandise. Without getting into the history of the DM and the distributor wars of the 1990’s, let’s just say the DM is controlled by one distributor – Diamond Distributors. If you want to sell comics, you open a Diamond account and order books and merchandise. Whatever you don’t sell, you’re stuck with it. Your discount is based on the dollar amount ordered; the less you order, the lower your discount. If you want to add comics to your store as side sales, your margin is lower and you can’t send back unsold goods. This makes stores less likely to take a chance on ordering more or ordering things that are different, lest they get stuck with unsold inventory.

We need a new system – one that allows bookstores, newsstands, or any retailer to be able to get comics without having to open another account. The books need to be at least partially returnable so that retailers can take a chance on new merchandise. Potential readers need to be able to make an impulse or casual buy on a comic without going specifically to a comic book shop.

These places don’t need to sell a FULL line of books, they can get by just carrying the top selling books. If someone casually buys a book for themselves or their kids, that person might get interested enough to continue buying them or trying something different. Then they can seek out a specialized shop, a local comics shop, to get what they’re looking for and seek help on when to read.

I feel that this won’t take away sales from comic book shops, but will generate enough interest to drive people into them. They were probably never going to see that casual sale to begin with, but when the resources of the newsstand can’t meet the demand of the consumer, the consumer will seek out the comics shop. That’s where the shop can take full advantage of their specialized knowledge and increase their sales.

This casual / impulse sale can do so much more for comic book sales than digital can just because you can pick it up, flip through it, and decide in seconds whether you’re going to buy it.

I started as a casual reader who picked up his comics from a retailer who didn’t sell comics as the bulk of his sales back in 1985. I then sought out comic book stores in my area for books other than Marvel or DC. Eventually I got caught up in the black & white comics boom started by the Teenage Mutant Ninja Turtles, and eventually sought out independent books like Lloyd Llewellyn and Cerebus.

I have since owned and ran my own comic book shop and currently write for my own site dedicated to comics. If my local bookstore didn’t carry those books, I may have never followed that path.

Now imagine how many potential readers, fans, or collectors might not ever get turned on to comics because of the current Direct Market.