"American Muscle": a race against nothing across a post-apocalyptic America. "Triggergirl 6": the perfect assassin — except for her conscience. These are the first two titles showcased in the new Image Comics anthology, CREATOR OWNED HEROES, edited by Jimmy Palmiotti.

"Creator-owned" isn’t just a business model — it’s also a publishing philosophy that focuses on creators of comics, who retain the ownership and all the rights to their creations, rather than on "properties" that are corporate property. CREATOR OWNED HEROES was created not only as a vehicle for creators’ creativity but emphasize the importance of this model to the reading public.

"With Creator Owned Heroes we wanted to not only have a place to introduce new ideas and concepts, but to give the reader a place to come each and every month to interact and explore the world around us," said Palmiotti. "This is a personal project that will continue to grow with the support of our readers and I for one am looking forward to its evolution. "

In "American Muscle," written by Steve Niles (30 Days of Night) with Kevin Mellon (HEART) on art duties, a group of rebels break off from the last stronghold of human civilization in search of a fabled paradise on what used to be the West coast of the United States. What they find, however, is something much different…

"Triggergirl 6," by Jimmy Palmiotti (Jonah Hex, QUEEN CRAB), Justin Gray (Power Girl, Jonah Hex) on the writing side and art by Phil Noto (Avengers: The Origin, THE INFINITE HORIZON) offers a very different kind of future, one where a woman designed to be a perfect killer can be created in a tank and then let loose on the world.

The first issue of the monthly anthology also includes interviews with comics and literature superstar Neil Gaiman and with cosplaying twins Juli and Alex Abene, who created a Triggergirl costume based on an incentive cover of the first issue. 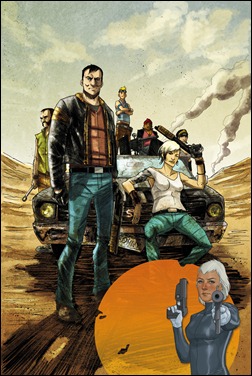 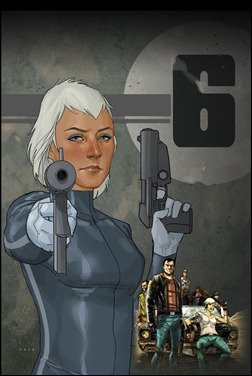