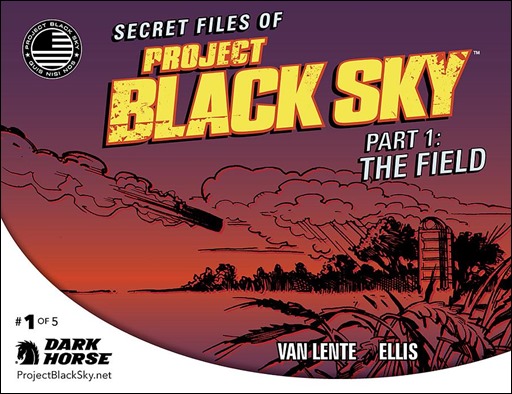 Dark Horse just announced their Project Black Sky web comic, which runs from May to September 2014 with a new panel almost every day, just in time for Free Comic Book Day 2014.

While many comics fans are headed to their local comic shop to get their free goodies this weekend, Dark Horse launches the hottest web comic of the year at ProjectBlackSky.net!

Intrigued by the investigations of the conspiracy blog IWatchTheSky.com, Dark Horse Comics has done some digging and uncovered some of the mysterious Project Black Sky’s secret files.

Project Black Sky will run through September with a new panel almost every day! Three series artists with top-level security clearance will provide illustrations for the stunning story line.

Project Black Sky Part 2: The Launch features art by Michael Broussard and will post weekdays with forty screens beginning May 5.

Project Black Sky Part 4: The Base features art by Guiu Vilanova and will post every day of the week with thirty-two screens beginning August 21.

Fans can head to their local comic shop to pick up the Free Comic Book Day 2014 issue of Project Black Sky! Meanwhile, head to ProjectBlackSky.net every day for a new piece of the puzzle!

Check out the exclusive interview with Fred Van Lente only on Comic Book Resources!