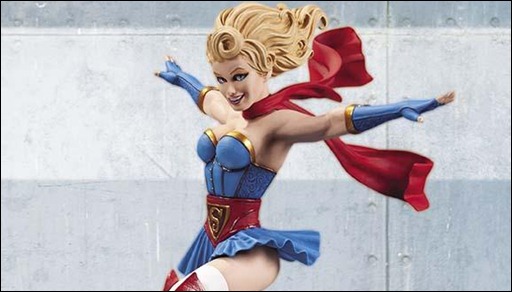 Here are the DC Collectibles solicitations for May 2013 courtesy of DC Comics.

A young boy learns that he has extraordinary powers and is not of this Earth. As a young man, he journeys to discover where he came from and what he was sent here to do. But the hero in him must emerge if he is to save the world from annihilation and become the symbol of hope for all mankind.

The Metal Men isn’t just a boy’s club, so don’t forget about Platinum. As the first robot created by brilliant scientist Doctor Will Magnus Platinum became the founding member of the Metal Men. With her ability to shape-shift, stretch, and put up with her teammates, Platinum is one precious metal!

INJUSTICE: GODS AMONG US ACTION FIGURES

What if our greatest heroes became our greatest threat? Injustice: Gods Among Us introduces a bold new franchise to the fighting game genre from NetherRealm Studios, creators of the definitive fighting game Mortal Kombat. Featuring DC Comics icons such as Batman, Cyborg, The Flash, Green Arrow, The Joker, Green Lantern, Superman and Wonder Woman, the latest title from the award-winning studio presents an original story. Heroes and villains will engage in epic battles on a massive scale in a world where the line between good and evil has been blurred. With over 20 points of articulation each figure is highly posable!

DC Collectibles is proud to announce the launch of a brand new line of statues, inspired by the pin-ups of the 1940s and 1950s. Who better to blast off this newest line than two of DC’s most powerful heroines? Featuring, fashion from the 40’s and 50’s, DC Collectibles has captured the “can do” attitude of the era!