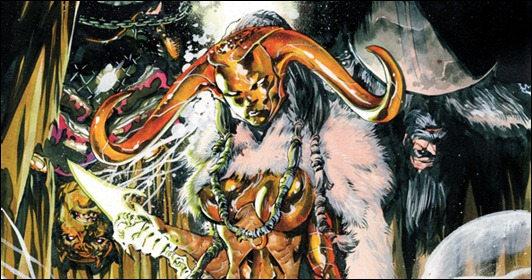 Here are the August 2012 The Dark Group solicitations courtesy of DC Comics.

• Abyss has arrived! Can the newest Dialer – or anyone – stop him?

• In a desperate attempt to save Manteau from X.N., Nelson is forced to team with his enemy.

• Plus, the secrets of Squid revealed!

• The divided team must go up against BLACKBRIAR THORN!

• Continued in this month’s SWAMP THING #12.

• BUDDY and ALEC go into the Rot, and events from the last year of both series are recapped for new readers.

• Continued from this month’s ANIMAL MAN #12!

• ANIMAL MAN and SWAMP THING – together at last!

• The conclusion of “SON OF SATAN’S RING”!

• THE DEMON KNIGHTS are helpless in the clutches of MORGAINE LE FEY!

• Even worse, they’ve already given her exactly what she needs to become the planet’s most powerful magician!

• Mitch meets the person who’s been pulling the strings of his misfortunes since issue #1!