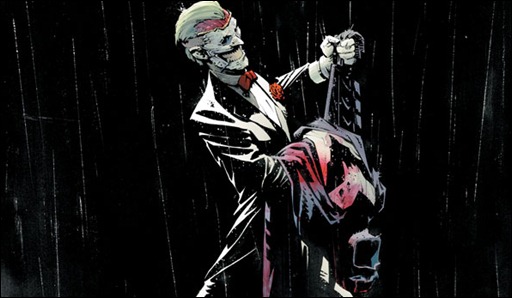 • Everything Grant Morrison has been planning since the start of BATMAN, INCORPORATED leads to this stunning issue!

• You must not miss this one!

• This is it: The stunning conclusion to “DEATH OF THE FAMILY”!

• Who lives? Who dies? Who laughs last? Find out as Batman and The Joker face off one last time!

• The Talon vs. Felix Harmon, a.k.a. The Gotham Ripper!

• The bank heist goes terribly wrong. Who will make it out alive—and who is already dead?!

• The Talons secret hideout is in danger—and so are all the people in it!

• Ethan Van Sciver’s first storyline as regular artist continues as the gory details of The Mad Hatter’s past are revealed!

• With The Mad Hatter kidnapping citizens all over Gotham City, not even Batman can figure what he’s after.

• Batman and Robin gear up to protect Gotham City in the week leading up to the 300th anniversary of the city’s founding!

• It’s a who’s who of Gotham City’s worst against The Dynamic Duo!

• The repercussions of “DEATH OF THE FAMILY” spread as Batman tracks down the League of Smiles, a criminal group of psychotic killers that worship The Joker!

• Plus: In the backup story, learn the secrets behind The League of Smiles’ beginnings!

• Barbara Gordon must deal with the fallout from “DEATH OF THE FAMILY” in this issue that will forever change her status quo in The New 52!

• What does James Gordon Jr. have planned for his sister, Batgirl?

• It’s the massive conclusion to the current storyline as Batwoman and Wonder Woman struggle to defeat Medusa and a horde of villains!

• Don’t miss the start of a surprising new status quo for Batwoman!

• After facing down The Joker and the power of Eclipso, Catwoman needs some downtime—which for her means a crime spree!

• Detective Alvarev is back on her tail—this kitty needs to watch her step!

• Something strange is happening to Black Canary…and only one man can be responsible. But Kurt Lance died years ago—right?

Written by FABIAN NICIEZA
Art and cover by FABRIZIO FIORENTINO

• “BATWING: ENEMY OF THE STATE” continues!

• Batwing learns the hard way that you can’t bring justice to a country that doesn’t want it!

• Plus: Batwing battles the Sky Pirate!

• Dick Grayson’s life lies in ruins in the wake of the events surrounding “DEATH OF THE FAMILY”!

• Is his career as Nightwing over? Where will he go now?

• Will the voice of reason come from Damian Wayne?

RED HOOD AND THE OUTLAWS #17

• In the wake of “DEATH OF THE FAMILY,” Bruce Wayne confronts Jason Todd!

• You DO NOT want to miss this!