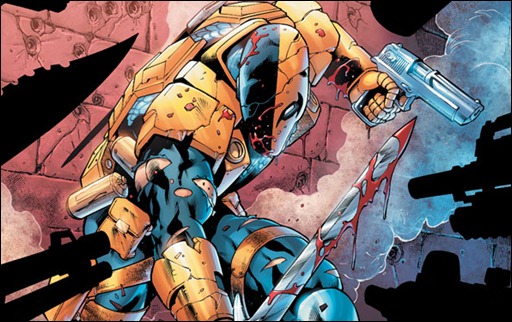 Here are the February 2013 The Edge Group solicitations courtesy of DC Comics.

• The secret history of the DCU’s original Cyborg Program!

• Who is Spartan? And what is the threat of the Majestic Program?

• Slade Wilson takes his first steps down the path that will lead to his becoming Deathstroke!

• And in the Larfleeze backup story, the hunt is on for Larfleeze’s stolen power battery — but the clock is ticking on his ring’s charge!

• Gather round for a lesson in the terrible secret history of Gotham City with Jonah Hex!

• Hex and Doctor Arkham are at the forefront as a disease threatens to destroy part of the city. The patient survival rate is looking pretty grim…

• Plus: In the backup story, meet Jenny Freedom and the StormWatch of the 19th century!

• A dangerous surprise from Yo-Yo’s past awaits the Squad.

• And a familiar face returns, against all odds!

Written by PETER MILLIGAN
Art and cover by WILL CONRAD

• Don’t miss this major turning point issue as everything changes!

• The death of a StormWatch member!

• The end of StormWatch headquarters!

• A corporation hires Deathstroke to track down and neutralize who is responsible for attacks that seem to have little rhyme or reason to them.

• What the world’s greatest mercenary finds may finally cause him to break a contract for the first time!