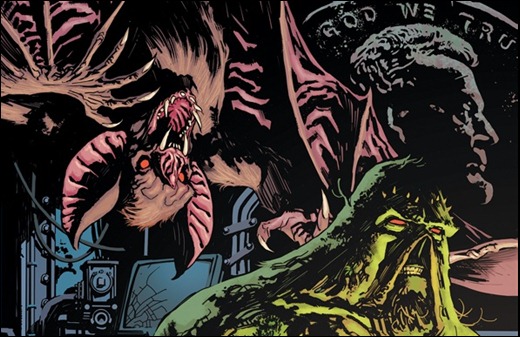 Here are the January 2013 The Dark Group solicitations courtesy of DC Comics.

• John Constantine and Justice League Dark are about to learn the hard way why it’s never a good idea to make the Phantom Stranger angry!

• But why do the defenders against the dark arts need the Stranger’s presence in the first place?

• Amaya travels home to Earth from Gemworld only to find new trouble! What will happen to her powers when she becomes Amy Winston again?

• And in the new backup story, enter a world of modern magic and terror with Stalker, the man without a soul!

• Animal Man has Constantine, Steel, Black Orchid, Beast Boy, Frankenstein and a whole army of patchwork men and women at his back — but is that enough to go up against Anton Arcane at the heart of the Rot?

• Team Red sets off for Metropolis to recruit a powerful new ally!

Written by SCOTT SNYDER
Art and cover by YANICK PAQUETTE

• “ROTWORLD: THE GREEN KINGDOM” races toward its epic conclusion!

• It’s Swamp Thing vs. Rotmonster as Superman as Arcane’s ultimate plan is revealed!

• What sacrifice must Swamp Thing make to cleanse the Earth of the Rot?

• And what secret did Batman leave behind in the ruins of Gotham City?

• The team is trapped on a magic-less planet that makes a horrible mockery of their powers!

• With time running out, Tim Hunter may be the team’s last chance to escape…if Steve Trevor doesn’t seal their fate first!

• Keep an eye out for a new character based on a winning design from SyFy’s popular show Face Off!

• Frankenstein and his team of misfit S.H.A.D.E. agents are sent in to stop a group of superpowered biological terrorists from detonating a

• The Centipede creeps in and strikes!

• Nelson and Roxie are on the trail to unlock the mysteries of the H-dial while being stalked by the mysterious Centipede, who may have the answers they are looking for…and his own dark and deadly motivations.

• Everything combusts when Flame War appears and ignites a confrontation that must be read to be believed!

• It’s been thirty years since the Demon Knights last rode together — and they’re less than happy to see each other!

• What has happened during this time? Who lives? Who’s dead? Who’s going to stop the massive vampire invasion that threatens all life? The Demon Knights had better find some answers fast!

• The true origin of vampires in The New 52 is revealed here through the life and times of Cain!

• Andrew’s plans as King of Vampires are coming together, and that’s not good for humanity.