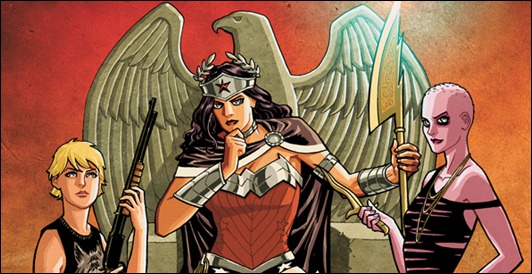 Here are the Justice League Group solicitations for July 2012 courtesy of DC Comics.

• “BREAKDOWN” part five!
• The team is defeated at the hands of The Burners – and not everyone will escape this epic alive!

• The all-new origin of ALAN SCOTT GREEN LANTERN – unlike any GL origin that’s come before!
• The debut of the all-new HAWKGIRL!
• And Jay Garrick, THE FLASH, meets his first Super Hero!

Retailers: This issue will ship with two covers. The variant cover will feature the standard edition cover in a wraparound format.

• Huntress and Power Girl begin trying to track the “invader” who came through the Boom Tube from Earth 2 with them.
• More is revealed about the first five years our heroines spent stranded on our Earth.

• “THE OTHERS” part five!
• AQUAMAN and THE OTHERS catch up with Black Manta – but are they really united as a team?

• A new story begins as APOLLO makes his play for ZEUS’S throne – and WONDER WOMAN is the last obstacle in his way!
• As ZOLA goes into labor, a hideous secret is revealed!

• CAPTAIN ATOM has regained his human appearance – but how is this possible? What has he done to himself?
• Wishes are coming true all around him – what will the price be?

• Vandal Savage unleashed!
• In the final chapter of this story, KASS is forced to make the ultimate choice between two killers – and her father may be the worse of them!

• The New 52 debut of HEAT WAVE!
• THE FLASH is on a crash course with THE ROGUES!

THE FURY OF FIRESTORM: THE NUCLEAR MEN #11

• JASON and FIREHAWK head to Russia and discover the secret origin of POZHAR!
• Ronnie, Rakshasa and Pozhar head to the wilds of mountainous Pakistan to continue their hunt for the heart of the rogue threat: ASHRA KHAN!

• Beginning a new story in which OLIVER QUEEN returns to action in Seattle to discover that the city has fallen into the gutters during his absence.
• Who are the DARK ARROWS?

• HAWKMAN inches closer to answers about who he is and why he is being hunted!
• Introducing ST. BASTION! He’ll stop at nothing to discover the secrets of the scrolls Carter Hal revealed in issue #9!