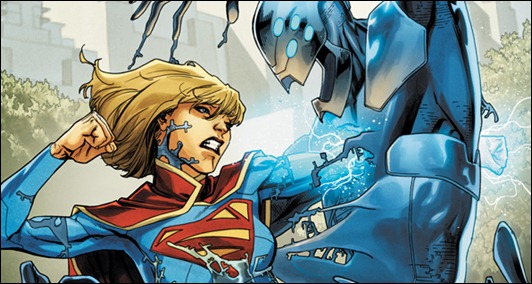 Here are the Superman Group solicitations for July 2012 courtesy of DC Comics.

• Superman’s NEW secret identity revealed!
• LOIS LANE continues her investigation into the mystery of Earth’s FIRST Superman!
• Plus, in the backup story: We know where Superman got his armor costume, but where did he get all those “S” T-shirts?

• A powerful and violent being from a different dimension has been mistakenly brought to Earth – and only SUPERMAN can stop it!
• What is the true nature of SUPERMAN’S costume?

• SUPERBOY’S spent his whole short life in the clutches of N.O.W.H.E.R.E. – so now that he’s free, where will he live? How about NEW YORK CITY?
• Guest-starring TEEN TITANS teammate BUNKER as they try to stop the rampage of the monstrous DETRITUS!

• It’s Supergirl’s first date on Earth – which means it’s time for a new villain to attack and Supergirl to figure out…she has new powers?