Here are the Batman group solicitations for June 2012 courtesy of DC Comics. 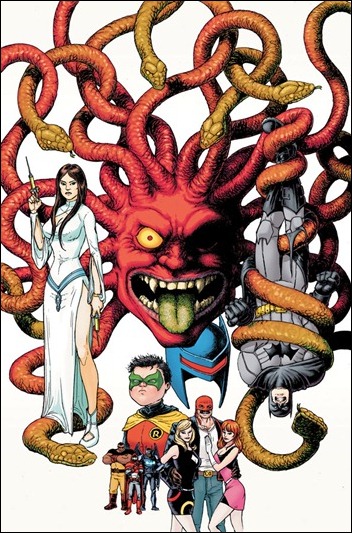 • This is the story of a man and a woman fighting over the heart and soul of their child. Unfortunately for the world, the man is BATMAN, the woman is TALIA AL GHUL, and the child is DAMIAN. 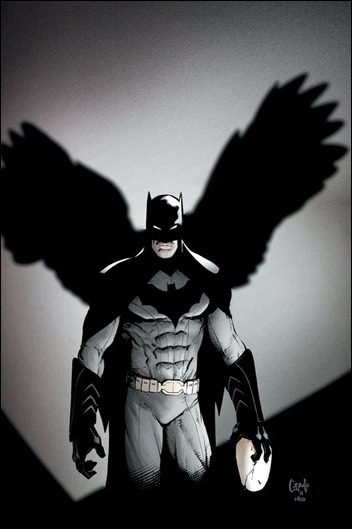 • BATMAN takes the fight to THE COURT OF OWLS!
• Discover the evil mastermind behind THE COURT.
• Plus: The “Fall of the House of Wayne” backup by SCOTT SNYDER, JAMES TYNION IV and RAFAEL ALBUQUERQUE. 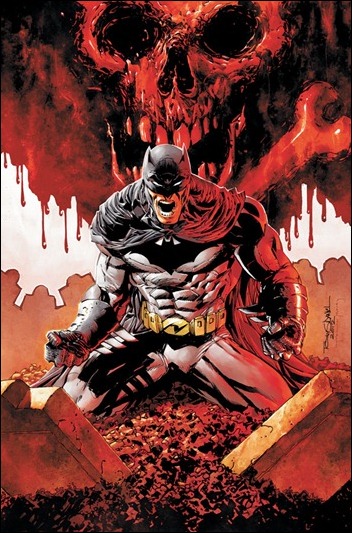 • BATMAN must defend WAYNE ENTERPRISES from espionage and himself from the menace of HYPNOTIC!
• The latest chapter in the TWO-FACE backup story! 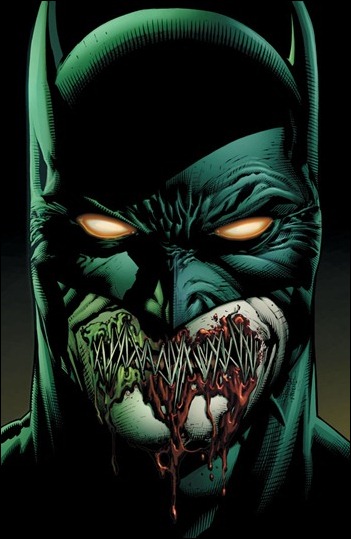 • Welcome new series writer GREGG HURWITZ!
• Kicking off a major story pitting BATMAN against the most deadly version of the SCARECROW he’s ever seen!
• This isn’t about fear…it’s about TERROR! 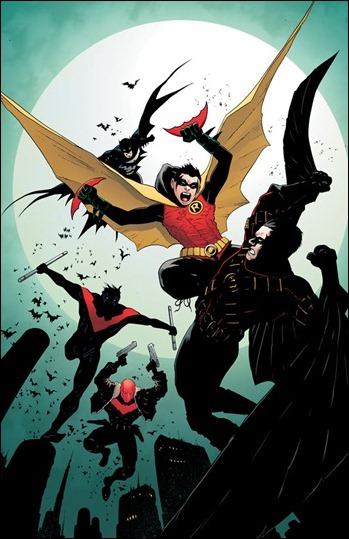 • Someone calls a meeting of the ROBINS, but who and why? And will the exiled and egotistical RED HOOD answer the call?
• RED ROBIN learns of DAMIAN’S betrayal – but how long will the youngest ROBIN’S lack of discipline stand?
• Many of Gotham City’s villains blame BATMAN for their downfall, but what happens when they stand together in a pact to bring the DARK KNIGHT down? 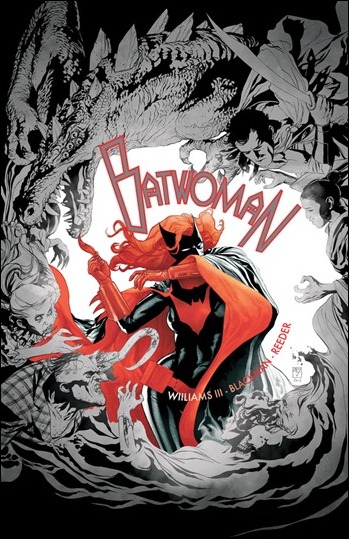 • Ambushed by KILLER CROC!
• The penultimate chapter of “TO DROWN THE WORLD” reveals the true nature of the villain BATWOMAN has been searching for all this time! 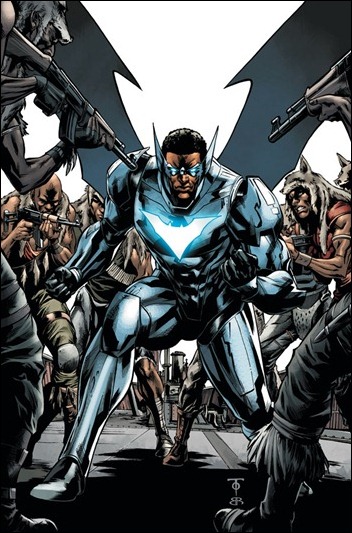 • BATWING fights pirates known as THE JACKALS as they attempt to smuggle a mysterious cargo.
• BATMAN’S investigation leads him to China to face an unexpected member of his ROGUES GALLERY!
• Guest-starring BATMAN! 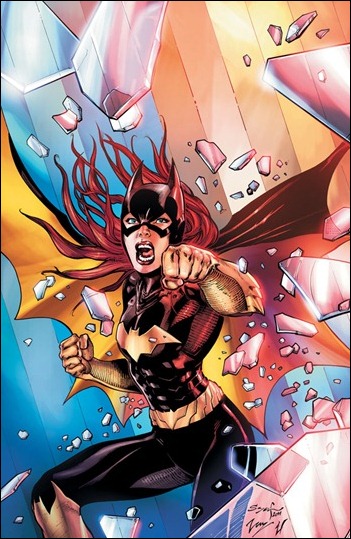 • Don’t miss the introduction of a villain destined to become Barbara’s greatest and most dangerous foe!
• An innocent woman who was sentenced to life in ARKHAM ASYLUM, Knightfall is now free and more dangerous than the psychotics she was imprisoned with. Her bloody quest for revenge will be unlike anything Batgirl has ever seen. 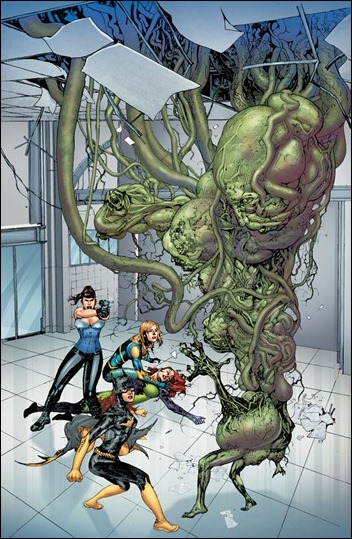 • THE BIRDS bring a gravely injured POISON IVY to the Amazon hoping to help rejuvenate her, but they’re going to need her help more to stay alive! Welcome to the jungle indeed!
• BLACK CANARY discovers something amazing about her powers! 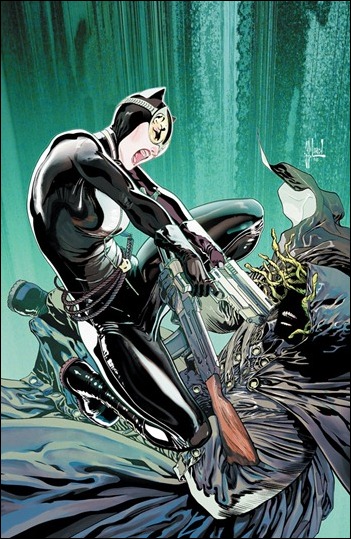 Written by JUDD WINICK
Art and cover by GUILLEM MARCH

• Meet DOLLHOUSE – a psychotic who kidnaps children from the streets of Gotham City. She’s about to awaken a rage in CATWOMAN that nobody knew existed…not even Catwoman!
• CATWOMAN’S partnership with SPARK continues – on a whole new level! 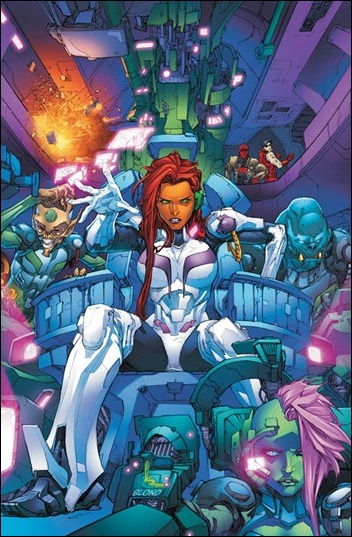 RED HOOD AND THE OUTLAWS #10

• RED HOOD learns that STARFIRE is one of the most respected and feared commanders in all of space! Who knew?
• Princess Koriand’r homeworld of TAMARAN is in danger – and she must defend a world that once turned its back on her!
• Plus: The start of a new backup st ory starring ESSENCE! 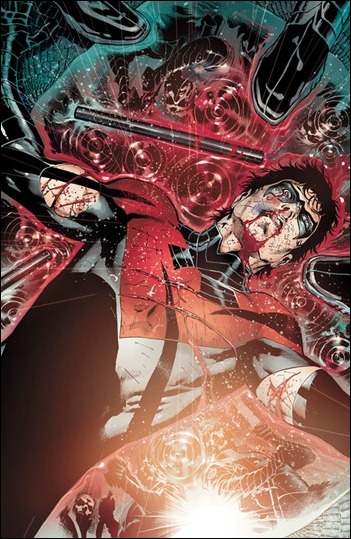