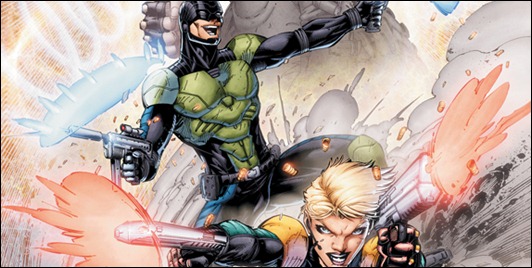 Here are the November 2012 The Edge Group solicitations courtesy of DC Comics.

• The Black Diamond continues its journey through DC’s history as it shows up in 19th century Gotham.

• Someone has stolen the Black Diamond that Doctor Jekyll uses to create his infamous potion, and he’s hired Jonah Hex to track it down!

• While Hex follows the trail of Gothamites under the influence of a bootleg copy of the potion, Amadeus Arkham must face the mad doctor on his own.

• Midnight in Paris! Grifter vs. Midnighter in the city where Cole was forced to kill his brother!

• Hawkman is a wanted fugitive with a bounty on his head — and Deathstroke aims to collect!

• Find out what the mysterious connection is between Deathstroke and Hawkman’s Nth Metal armor!

• The secret history of The New 52 is told here – with bullets!

• Set five years in the past, Team 7 races into the heart of darkness to stop the evil that the Black Diamond will unleash!

• Jeb Stuart and the Haunted Tank rescue his grandson, Scott Stuart, and fellow prisoners of war.

• And in the backup story, The Unknown Soldier gears up to take out a group of revolutionary domestic terrorists — and he’ll need all the backup he can get against this group of tech-savvy civilians!

• A funeral for a friend is interrupted by Harley’s past!

• Amanda Waller has found the Squad’s traitor — but has she lost the war with Basilisk?

Written by PETER MILLIGAN
Art and cover by WILL CONRAD

• Will Stormwatch’s battle with Etrigan the Demon expose them to the public?

• Will rival Harry Tanner’s plan to infiltrate the Shadow Lords lead to the team’s destruction?

• Plus, a former member returns!