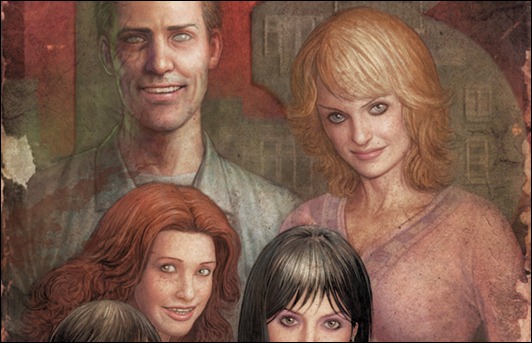 Here are the October 2012 Beyond DC Comics – The New 52 Group solicitations courtesy of DC Comics.

• Don’t miss the start of this far-ranging collection of stories from comics legend Joe Kubert and other great talents! This debut issue includes:

• A tale of Angel and The Ape from writer/artist Brian Buniak.

• Plus: Writer/artist Sam Glanzman returns to comics with a new tale of the U.S.S. Stevens!

LEGENDS OF THE DARK KNIGHT #1

• The first time in print for this digital-first series!

• Original, non-continuity short stories featuring Batman as written and illustrated by some of comics’ finest talents!

• Stories in this debut issue include “The Butler Did It,” “All of the Above” and “The Crime Never Committed.”

• The first time in print for this digital-first series!

• First of new series inspired by the popular figures from DC Collectibles!

• Wonder Woman must stop an attack on Themyscira!

• The Gotham City Sirens are caught in the Arkham spotlight!

• Whose side is Harley Quinn on?

• Catwoman battles The Jokerz as a shocking new ally joins the fight!

• It’s open warfare over Metropolis as KOBRA’s attempt to destroy the Earth begins!

• The cataclysmic conflict between Superman and Lex Luthor’s heir comes to a head!

• The once-famous tarot card reader Madame X now works at a law firm as the resident “psychic” – but can her “powers” help her solve a complicated new case?

• Can the newly formed duo stand a chance against this villain’s strange powers?

• A terrifying new horror series from the ghoulish minds of Steve Niles (30 Days of Night) and Glenn Fabry (PREACHER)!

• A family making a cross-country move makes a horrifying discovery in an old apartment complex. Can they survive the night?

MASTERS OF THE UNIVERSE: THE ORIGIN OF SKELETOR #1

• Take a look at the twisted origins of Eternia’s most loathsome and terrible villain.

• What horrific events from Skeletor’s secret past defined the evil despot he became?

• His fiendish plan sends a new villain to the Interceptor!

• Will Hal save the day? Or will Razer?!

• In his side of the comic, The Dark Knight meets Gotham City’s new vigilante, the Cavalier, and battles the evil of Ra’s Al Ghul in stories from BATMAN ADVENTURES #1 and #4.

• And in the other side, the Mystery Inc. Gang tries to get to the bottom of “The Costume Caper,” in a story from SCOOBY-DOO, WHERE ARE YOU? #2.

• Bugs Bunny makes a wrong turn at Albuquerque and winds up in the middle of a baseball game instead of Palm Springs.

• Can he reach home base in time to enjoy his vacation?

• Fred, Velma and Daphne are on the hunt for clues in another creepy case!

• While the others hunt for clues, Scooby and Shaggy hunt for snacks!

• Can it be true? Has Superman met his match in Metallo?

• Who is Metallo? And what’s up with his heart?

• Where does Lex Luthor fit into all of this?

• Watch out! There’s a new Super Hero in town!

• Aliens have arrived on Earth-16!

• Superboy and five Justice Leaguers have been abducted!

• Metropolis is in danger!