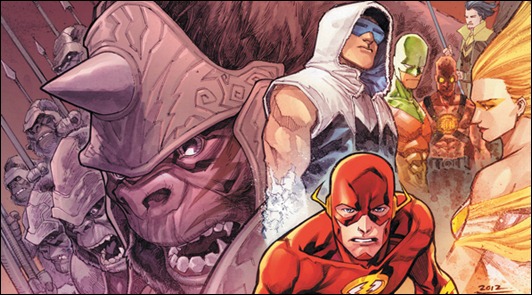 • GEOFF JOHNS is joined by TONY DANIEL for a two-part chapter in the Justice League saga marching toward TRINITY WAR.

• JUSTICE LEAGUE #12 will have the world debating its shocking conclusion – and where it will lead from here!

• The League takes on a villain destined to be one of the greatest threats to the DC Universe in the year ahead – the mysterious Cheetah! But who is she? What is her connection to Wonder Woman? And how will this fundamentally change the relationships within the team?

• Plus: The next chapter of the SHAZAM! backup epic by Geoff Johns and Gary Frank!

• Aquaman pushed to the breaking point!

• Who is Black Manta working for?

• A terrible betrayal forces Wonder Woman to make a deal with the gods who want her dead!

• Ares, god of war, takes a sudden interest in the Amazing Amazon!

• Side by side with the Chinese kung fu genius extraordinaire, Suzie Ming!

• Ollie comes home to find trouble in the sky over Seattle – trouble that will lead to the “HAWKMAN: WANTED” storyline starting next month in GREEN ARROW and THE SAVAGE HAWKMAN!

• The secrets of Hawkman’s past are coming to claim him in an adventure that will span the entire DC Universe before its shocking conclusion!

• Continues next month in both THE SAVAGE HAWKMAN and GREEN ARROW!

• The New 52 debut of not one, but TWO heroes – Black Lightning and Blue Devil!

• Fan-favorite writer Marc Andreyko kicks off our strangest team up yet with a stunning mystery!

• Can these two VERY different heroes keep it together without killing each other long enough to unlock a new corner of the DC Universe?

THE FURY OF FIRESTORM, THE NUCLEAR MEN #13

• Ronnie and Jason not only not only have to deal with a new twist to the Firestorm powers, but they also must face off against the murderous DataXen!

• Gorilla Grodd’s army attacks Central City, and The Flash is forced to team up with the Rogues!?

• It’s the final showdown with GRUNDY!

• The Green Lantern, Hawkgirl and The Flash take on Grundy and the military’s hero, The Atom!

• The Green Lantern makes a choice that will change the course of Earth 2 forever!

• Power Girl and Huntress attempt to get back home to Earth 2 – but is the Boom Tube just a one-way trip?