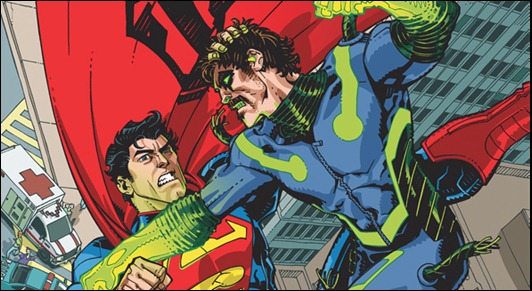 • You won’t want to miss the return of Krypto!

• Superman must face down a threat from the Phantom Zone – with the help of The Phantom Stranger!

• The secrets of the “missing five years” between when Clark Kent came to Metropolis and the present day continue to be revealed!

• In the wake of Brainiac’s attack on Metropolis, Superman faces his first Earth-born villain: the Kryptonite Man!

• Plus: A special backup story by the screenwriter of CHRONICLE, Max Landis!

• It’s a deathrap for Superman as he matches wits with his greatest enemy for the final time as The Man of Steel loses it!

• Supergirl in all-out battle with a new, deadly version of an old foe: Tycho!

• Check out Kara’s very own Fortress of Solitude!

Written by TOM DeFALCO
Art and cover by R.B. SILVA and ROB LEAN

• Superboy’s attempts to lead a normal life are interrupted by the reappearance of the mysterious Jocelyn Lure!

• Superboy’s search for Caitlin and the Ravagers leads to his guest appearance in THE RAVAGERS #5 this month.