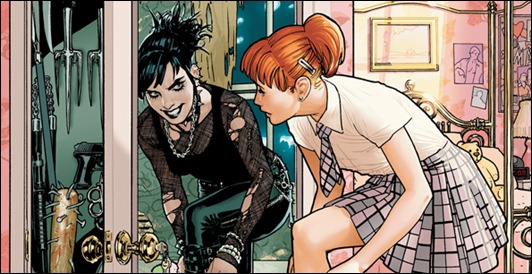 Here are the September 2012 Beyond DC Comics – The New 52 Group solicitations courtesy of DC Comics.

• ROBIN takes the spotlight in a solo adventure

• BANE vs. SOLOMON GRUNDY in a caged death match

• THE LEAGUE returns from APOKOLIPS in defeat and must prepare for

a last stand against KOBRA!

• PHANTOM LADY’s crusade to avenge her family’s death lands her in the hands of her worst enemies.

• Her tiny teammate, DOLL MAN, is on the way to save her.

• Their last stand against the evil Kassandra.

• The final fate of the new Night Force is revealed.

• The final issue of The Shade’s year-long odyssey is here!

• Learn the truth about one of the most mysterious men in the DC Universe and see once and for all what makes him tick: good or evil?

• The classic DC character Rose and Thorn is taken in a compelling new direction!

• Can a teenage girl with a dark secret, readjusting to life after being institutionalized, learn how to live again?

• SUPERMAN comes face-to-face with high-tech weapons on the streets of Metropolis.

• HE-MAN and TEELA battle in the ocean against the murderous MER-MAN!

• The high-flying STRATOS lends a hand against EVIL-LYN!

• Who is the mysterious PURPLE SUPERMAN?

• Is he trouble? Is he a hero? Does LOIS have a crush on him?

• Why does Superman feel sick when he gets near him?

• And who’s that new intern at the Daily Planet?

• The Red Lanterns attack – and only HAL JORDAN responds!

• Where are Hal’s fellow GREEN LANTERNS? Have they been defeated in some distant battle?

• You’ll have to read this issue to learn the truth!

SCOOBY-DOO, WHERE ARE YOU? #25
Written by SHOLLY FISCH
Art by ROBERT POPE and SCOTT McRAE
Cover by FABIO LAGUNA

• Is there anything scarier than a room full of monsters?

• Will Scooby and the gang be able to figure out who the REAL bad guy is?

• ALIENS have infiltrated the Earth!