Giving voice to DEAR DRACULA is a cast of well-known Hollywood veterans as well as breakout young actors:

The DEAR DRACULA animated feature is produced by Kickstart Productions (Voltron Force, Wolverine and the X-Men, The Amazing Screw-On Head), with a screenplay by Brad Birch (Johnny Test). 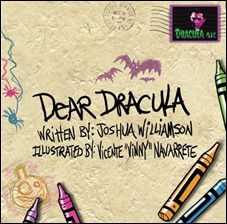 "This 48-page hardcover should find a permanent place in a child’s library. It’s especially satisfying for a youngster who loves classic monsters, Halloween and cheese."
– The Washington Times

"Dracula is presented as a kindly grownup, and all the horror elements are played strictly for laughs, so even younger children are unlikely to find the book too scary. Behind the scenes is a subtle lesson about learning about and respecting others’ differences, but the creators wisely avoid hitting the reader on the head with an obvious moral."
– The Graphic Novel Reporter

"This book is a rarity: a well-crafted, beautifully illustrated all-ages love letter to a horror icon. It deserves a place in everyone’s library."
– Comics in the Classroom