In the midst of this chaos, a warrior woman named Maya becomes the champion of humankind. She sets out to find the world’s last source of pure water, combatting Colossals along the way as she fights to save her fellow humans.

"I’m very fond of Scandinavian and European folklore, so I injected a lot of those concepts into the monsters that will appear throughout the series," Wiebe told Comic Book Resources in an April 25th interview. "It’s also very influenced by Native American (Canadian) mythology and even a touch of Mayan for some of the creatures. I like the idea that all these ancient monsters were once part of our world and have returned to end us when we are at our weakest."
With a look inspired by video games like Final Fantasy, DEBRIS boasts extraordinary creature design by Rossmo and vivid colors by Owen Gieni (AVENGELYNE) that set the comic apart from many other post-apocalyptic visions of Earth.

In an April 27th interview at IGN about the influence of the revolutionary video game series, Wiebe noted that DEBRIS shares the subject of "a world-changing battle against impossible odds, which is a constant theme throughout Final Fantasy." The IGN feature also included several FF-inspired teasers, showing Maya in battles against various Colossals.

In May, Wiebe also talked about the hotly-anticipated series at iFanboy, where a six-page preview of DEBRIS #1 was posted.

DEBRIS is a monthly four-issue miniseries published under Image Comics’ Shadowline imprint. The first issue will be in stores on July 25. It is available for pre-order now from the May issue of PREVIEWS with the code MAY120516. 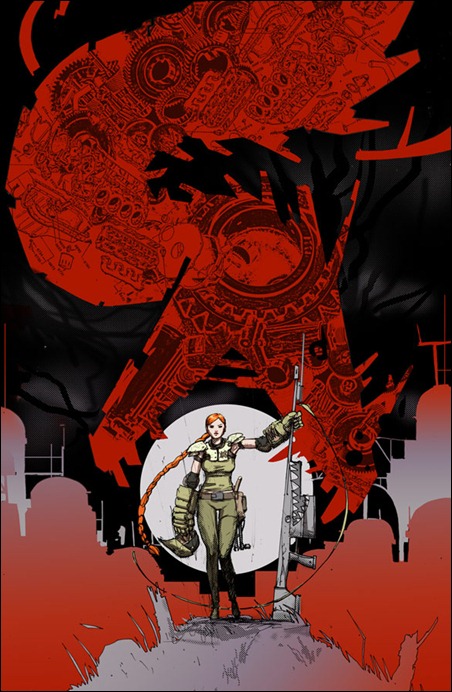