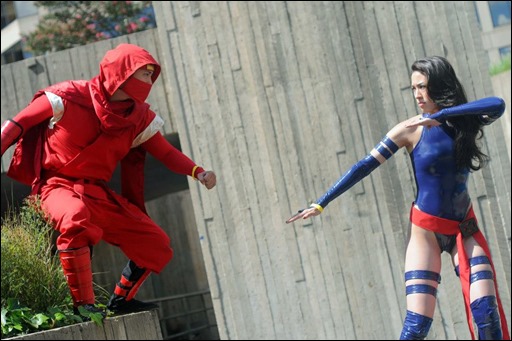 One thing is for certain though, their love of cosplaying shines through in their work.The Comic Book Critic Featured Cosplayers for April 8th, 2013 are: 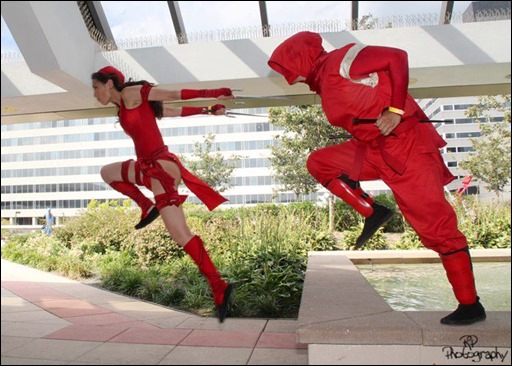 For the first time since we started this feature, we’re doing something different; We’re featuring a duo of cosplayers – Kris Lee & Joepool. They have been cosplaying as JK Cosplay for a few years now and their work is exemplary and dynamic!

They talk about their experiences in the interview…

We love the characters we portray so much that we want to make them come to life. Having a costume is like having the ultimate piece of character merchandise. 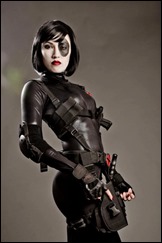 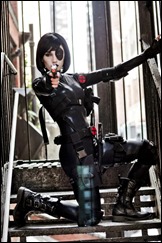 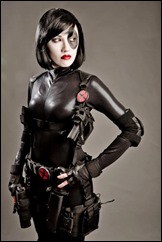 Did you guys meet as cosplayers or was it something you decided to start together?

We met at a martial arts class in college. When we got together we were both interested in the same things and started going to conventions together. We decided to start cosplaying soon after that. 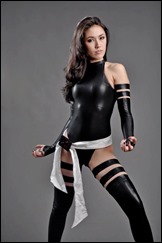 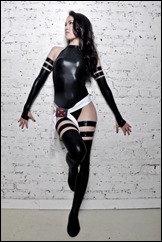 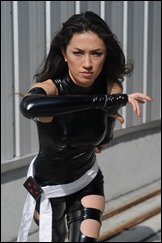 Do you model (other than cosplay), if so, is it something you did before you began cosplaying?

Joepool does not model but Kris started doing amateur modeling around the same time they got into cosplay. She’s worked with a lot of local photographers on small projects and enjoys modeling as a hobby. These days most of her modeling revolves around cosplay and we always do a couple photoshoots in costume at conventions.

We try to make or modify all our costumes. Kris does the sewing and wig styling while Joepool works on armor and props. We’re both self taught and have gained our skills through lots of trial and error. Once in awhile we’ll buy a pre made costume when it’s way too cost effective not to, but that’s very rare. 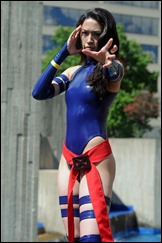 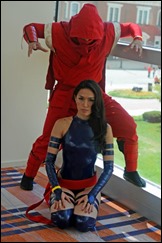 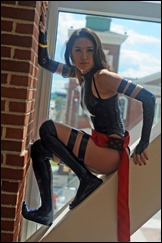 Which are your favorite characters? 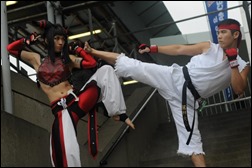 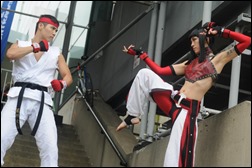 What do you like to do in your spare time other than cosplay?

In our spare time we have other nerdy hobbies like reading comics and manga, watching anime, playing video games and painting miniatures. We also like to stay in shape by working out and doing martial arts. Kris really enjoys cooking and Joepool really enjoys the food she makes. We have so many hobbies that sometimes we have to combine them, like watching anime while we work on costumes and reading manga and comics while we eat! 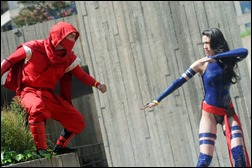 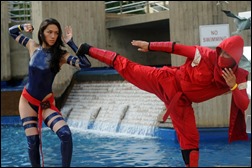 Yes, we do read comics on a regular basis. We keep up with everything Deadpool and we both read a couple other comic series. We’re big Marvel fans and don’t delve much into DC comics. Right now our favorite series is Uncanny X-Force and Thunderbolts; you can look forward to more costumes from those series in the near future.

Are there any particular events or conventions in which you prefer to appear?

We always spend Free Comic Book Day at our favorite comic book store, Collectors Corner, in Baltimore, MD. In terms of conventions we try to hit up most major east coast comic and anime cons. This year we’re going to Katsucon, C2E2, Collector’s Con, Otakon, Baltimore Comic Con and NYCC. We also go to a few small local conventions to support all the vendors in our area. We’re lucky to have jobs where the schedules are semi flexible and we can take off work to travel. 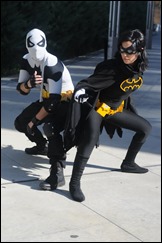 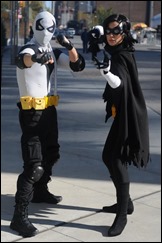 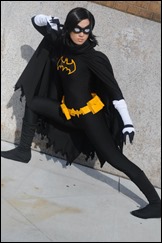 I think our most memorable moment while cosplaying was at Baltimore Comic Con 2010 when we cosplayed Deadpool Corps for the first time together. A little kid came up to us and literally thought we were the real thing. He also confided in us that one of the other cosplayers at the convention was a fake. It was pretty gratifying because usually small children unintentionally call you fat or something. It’s also really cool to get pictures taken with artists or authors as the characters they draw or write about. We’ve had our picture taken with Rob Liefeld as Deadpool Corps and with Rick Remender as Uncanny X-Force. Both were super nice and good sports about it. The most memorable moment while cosplaying was definitely meeting Stan Lee though. He literally photo bombed us in the middle of the con floor and ask to jump in the photo. We were so shocked! Kris probably hugged him hard enough to crack a rib. 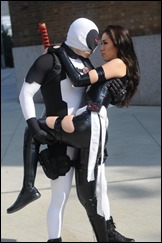 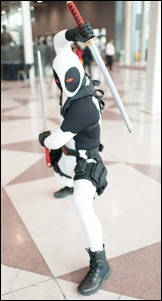 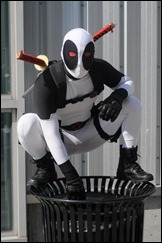 Are there any downsides to appearing at cons in costume?

The biggest downside to appearing at cons in costume is getting stopped all the time by people that want pictures. It makes getting around really hard, especially at really large crowded conventions like NYCC. As cosplayers we know it’s going to happen so we don’t get annoyed, it just comes with the territory. Sometimes we’ll go a day in plain clothes just to do our shopping and sight seeing. Besides that there’s always a lot of prep work involved in the mornings getting ready and usually costumes aren’t very comfortable to be in all day. Packing for trips is hard too and we usually have to drive because we have so much luggage. We really enjoy cosplaying though and for all the downsides we still want to do it every single convention. 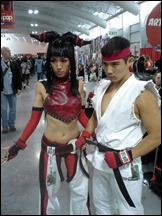 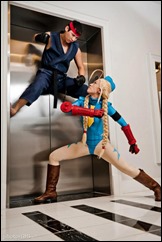 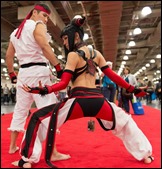 This doesn’t really have anything to do with cosplaying but we once went to a convention so small we basically walked in and walked back out. Didn’t even ask for a refund on the passes because we figured they really needed the money. We went back again the next year and the convention was much nicer and they remembered us from the year before and gave us free passes. Joepool does not remember his least memorable moment… 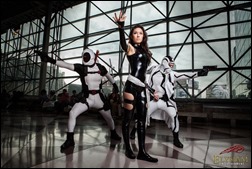 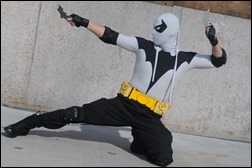 Kris’s favorite cosplayer is Mostflogged. I really love her attention to detail and craftsmanship. I also like that she cosplays what she loves whether it’s something super sexy or a crossplay. She’s done everything from Psylocke and Yoko Littner to Mokey D Luffy and Powerpuff Girls. You can check out her work here. Joepool really is a huge fan of Evil FX Props and Armor. Joepool considers Evil FX his armor making sensei and credits him with some of the techniques he’s using to make his first suit. Evil FX makes some really amazing suits of armor and even does commissions. We highly recommend that you check out both these amazing costume makers. 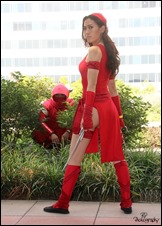 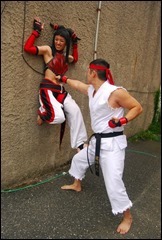 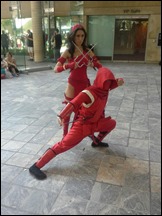 How long have you been doing this?

We started cosplaying in late 2010, so it will be three years in September.

How much time do you invest in cosplay?

Cosplaying is our main hobby. We spend at least a couple hours almost everyday working on costumes. On days we have off work we sometimes spend the entire day working on costumes. Even when we have friends over to hang out we usually spend that time doing cosplay related things together. We’ve met a lot of our good friends through the convention scene and through cosplaying. We would say that we spend about as much time on cosplay as if we had part time jobs doing it.

What advice do you have someone just starting out in cosplaying?

Our advice for new cosplayers is to really utilize your internet resources. We’re both self taught in pretty much everything cosplay related and online tutorials have been a life saver. Also don’t be afraid to ask other cosplayers questions. Most are more than willing to give tips and answer questions. People with questions about our costumes can send us a message on your Facebook fanpage. 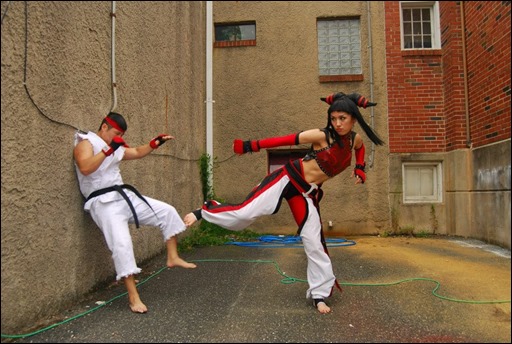 What does the future hold for you both?

The future holds bigger and better costumes. We’re both trying really hard to improve our skills. Expect to see full suits of armor in 2013.

Kris & Joepool, thanks for taking the time to answer our questions. We look forward to seeing more of you both in the future!

If you want to see more of JK Cosplay or want to contact them for appearances, check out the information below:

If you would like to book JK Cosplay for your convention or event, you can do so through their email here.