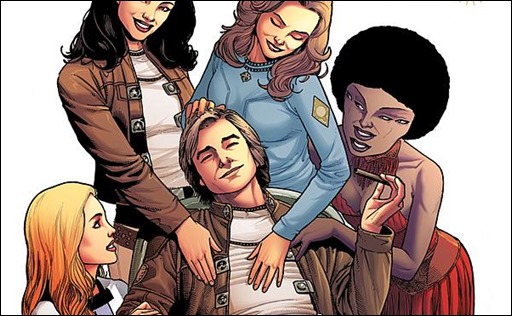 Dynamite is proud to show the first look at black and white interior pages for Battlestar Galactica: Starbuck #1, a New York Times bestselling author Tony Lee (Doctor Who, Star Trek: The Next Generation, Superboy) will spotlight the origin of a beloved sci-fi character in the upcoming Battlestar Galactica: Starbuck four-issue miniseries, based on the NBCUniversal television show.

I was eight years old when Battlestar Galactica came to the UK. My older brother Kevin took me to see the theatrical cut of ‘Saga of a Star World’ at my local cinema, as I’d been a massive fan of Star Wars the year before. And from the moment Patrick MacNee started talking about ‘life, out there, across the universe’… I was hooked. I didn’t want to fly an X-Wing anymore – I wanted to fly a Viper.

I was the kid at school who understood why Templeton Peck (Face) in the A-Team credits always looked confused as a Cylon walked past in an amusement park. I was the kid who sought out the cloaked Starbuck action figure over an Action Man doll, and had an entire range of Battlestar Galactica books and comics, including the hard to find Look In strip, and I was the kid who turned off ‘Galactica 80’ when it was shown that Starbuck had been left behind, and that Apollo had simply disappeared.

I wanted a Daggit.

I’ve always liked the scoundrels. Han Solo and Starbuck taught me a lot about life between them, so I probably owe a whole load of broken relationships and split lips during my teen years to them both.

When Nick Barrucci came to me with a suggestion to doing a Starbuck story, I jumped at the opportunity. Bar the fact that he was an amnesiac child after the attack on Umbra, we don’t know much about Starbuck’s history, mainly because we only had thirteen episodes (and a flash back Galactica 80 special) to learn about him. I wanted to fill in these gaps. I wanted to see the Starbuck that existed before the show. How did he meet Apollo? Why does Adama treat him like a surrogate son? Who taught him to smoke and gamble and womanise? What shaped the man we know, and more importantly, why did the Cylons attack Umbra that fateful day? That right there was when I knew the story I wanted to tell.

Battlestar Galactica: Starbuck is more than an origin story. Although the first episode starts with Starbuck aged around six, by the time we reach the second issue we’re two years before the Cylon attack on Cimtar that started the series, and Starbuck is investigating a conspiracy within the Quorum that links to his past, is framed for murder and forced on the run, with only his closest friends giving assistance as he finds himself embarking on a one-man war against the entire Cylon Empire.

Anyone who reads my Doctor Who comics knows that if I can, I like to fill my book with nods to the fans while keeping the story fresh for new readers, and Battlestar Galactica: Starbuck is no different. You can read this with only the vaguest clue to what’s going on in the show, and you can read far more into this as a fan of the original series. There’s even a nod or two back to the re imagined version!

I have a tick list, and writing Dirk Benedict’s Lt. Starbuck was definitely near the top of it. I’ve only met Dirk a couple of times over the years, and was very much looking forwards to meeting him at the Galacticon / Comicpalooza festival this year in Texas, as we were both guests. Unfortunately I had to pull out of attending, but my friend Frazer Hines (Jamie in Doctor Who and another attendee) made sure to send me a photo of him and Dirk, cigars in mouths. So hopefully I’ll get a chance to give him a comic at another convention down the line. 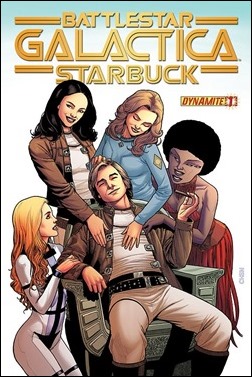 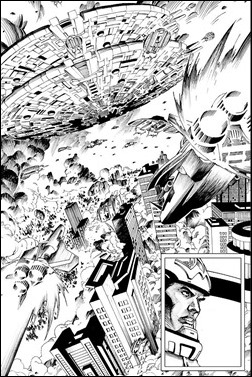 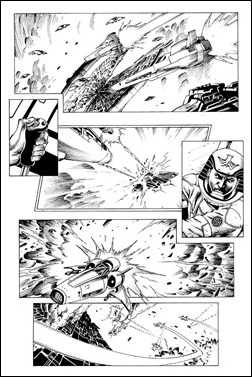 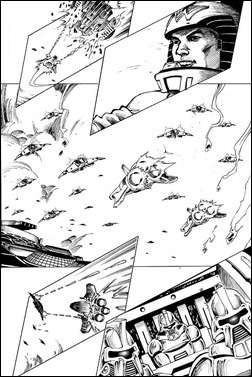 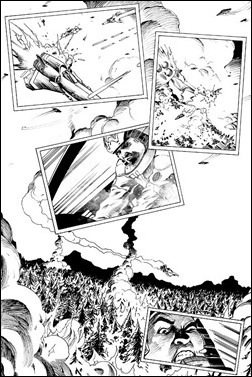 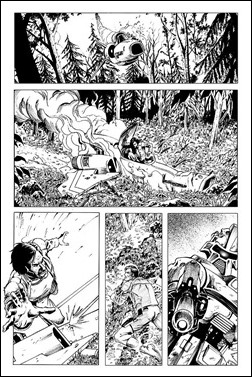 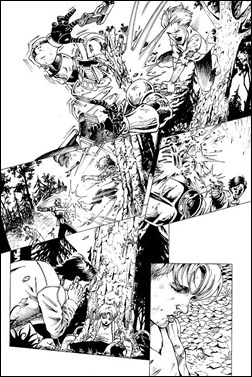