Earth’s Immortal Master of War Confronts a Cold, Calculating Villain from Valiant’s Past in an All-New Six-Issue Blockbuster!

Here’s your first look at Wrath of the Eternal Warrior #5, part one of “Prelude to Labyrinth” by writer Robert Venditti and artist Juan Jose Ryp, on sale March 16th, 2016 from Valiant Comics.

Valiant is proud to present an advance preview of WRATH OF THE ETERNAL WARRIOR #5 – the FIRST ISSUE of the two-part “PRELUDE TO LABYRINTH” from New York Times best-selling writer Robert Venditti (BOOK OF DEATH) and blockbuster artist Juan Jose Ryp (NINJAK)! On March 16th, jump on board one of the year’s most acclaimed new series here as the Eternal Warrior takes his first steps out of Hell…and into the crosshairs of one of the greatest villains the Valiant Universe has ever known!

Across six millennia, Gilad Anni-Padda – an immortal warrior sworn to forever serve the Earth – has felled zealots and madmen, emperors and tyrants in the course of his duty. But nothing he’s faced yet can prepare him to run the “LABYRINTH” – a miles-long maze of horrors specifically designed to undermine his every strength, enhance his every weakness…and send him screaming into the darkness of death at every turn. But what kind of brilliant but twisted psyche could have possibly conceived such a monument to terror…and for how many centuries have they plotted to break the mind and body of history’s most formidable soldier?

The answer lies at the heart of the “LABYRINTH” itself…and as Gilad endures a gauntlet of cutting-edge technology and sharpened steel, he’ll soon discover why the merciless figure known only as the Dying One has singled the Eternal Warrior out for the ultimate deathtrap.

“This tech environment that he is going to see in the labyrinth is something that he has never seen the likes of before,” writer Robert Venditti told Comic Book Resources. “It will be a great challenge for him. And operating in the background the entire time is this knowledge that someone has put him here for reasons he does not yet understand. He is trying to figure that out at the same time he is trying to survive. And as we come to see, for him not to survive. What the motives are behind that and how the Dying One is connected not just to Gilad but other people in his family, who we have seen in the afterlife, will also be explored. The Dying One reaches so far back into Gilad’s past, Gilad has no idea. It’s a very, very long game approach. The Dying One always knew what he wanted to do, but the world needed to get modern enough for him to be able to do it.”

Now, before Valiant’s immortal master of war confronts the cruel implements of his enemy’s “LABYRINTH,”  discover where the Dying One’s ancient rivalry with Gilad Anni-Padda began millennia ago…and how his centuries-long search for the secret of the Eternal Warrior’s immortality is going to change both of their futures forever!

Then, the escape begins in full force on May 18th with “LABYRINTH” – PART 1 (of 4) in WRATH OF THE ETERNAL WARRIOR #7, featuring the triumphant return of visionary artist Raul Allen (BLOODSHOT REBORN, Hawkeye)! The blunt force of Earth’s Fist and Steel slams into the cold and methodical masterwork of the world’s greatest executioner for a four-part lesson in pain when “LABYRINTH” takes hold in WRATH OF THE ETERNAL WARRIOR #7 – featuring covers by Raul Allen (Hawkeye), Pere Perez (ARCHER & ARMSTRONG), Juan Jose Ryp (Clone), Khari Evans (HARBINGER), and Dave Bullock (Rocketeer at War)! 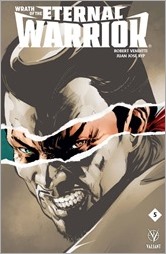 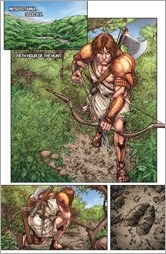 WRATH OF THE ETERNAL WARRIOR #6 (“PRELUDE TO LABYRINTH” – PART 2) 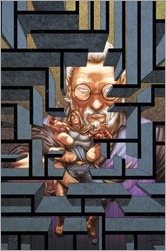 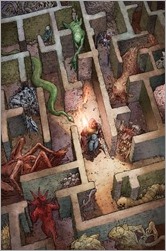