Media Release — In their long-standing mission to excavate rare comics treasures, Hermes Press is reprinting the entirety of legendary artist Gray Morrow’s Orion from the pages of Heavy Metal magazine. Orion is Morrow’s 1978 sword and sorcery masterpiece about an Errol Flynn-like swashbuckling hero who battles evil on a strange and mystical world. The project has been a mission of Hermes Press’s Christopher Irving for a decade, starting from his friendship with Morrow’s widow, Pocho Morrow.

"In doing an article on Gray after his untimely death in 2001, I got to become dear friends with Pocho," Irving says. "We’ve always talked about getting a tribute of Gray’s best work printed, and when we came across original Orion artwork, publisher Dan Herman was the first person I called."

Most of Gray Morrow’s Orion will be shot directly from Morrow’s original hand-colored artwork, and reproduced in full color.

Gray Morrow burst into comics in the 1950s, bringing his classic Alex Raymond-inspired style on everything from paperback covers to newspaper strips. Morrow’s work graced several issues of the Warren magazines, Classics Illustrated, and westerns for DC Comics (including El Diablo with writer Robert Kanigher). Morrow also served as editor of Archie Comics’ short-lived Red Circle horror line in the ’70s, which included art by his contemporaries such as Alex Toth and Angelo Torres. As a comic strip artist, he drew the late 1970s incarnation of Buck Rogers, as well as an eighteen year-long stint on the Sunday Tarzan strip. He died in 2001, after succumbing to Parkinson’s and general failing health.

Gray Morrow’s Orion will be published by mid-2012, with proceeds going to his wife Pocho Morrow. Accompanying Orion will be a biographical essay by Irving as well as more samples of Morrow’s inimitable artwork and storytelling. 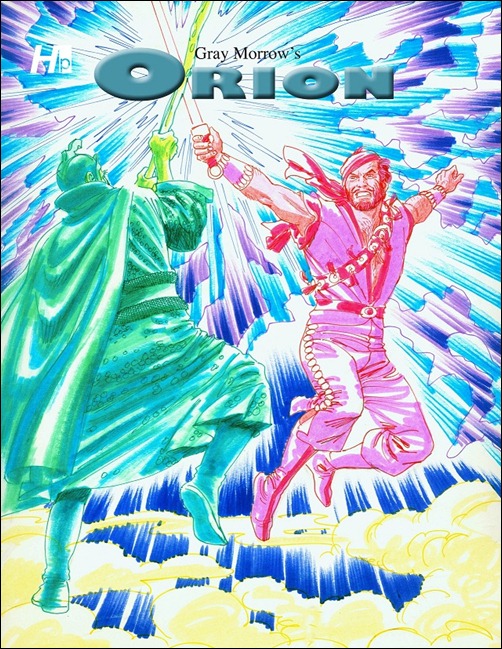