THE MASKS COME OFF IN HALLOWEEN EVE

Working late at the Halloween Land super-store can get pretty soul-numbing, so Eve thought she was pretty lucky to have such a great imagination. But it turns out that her imagination isn’t just active — it’s dangerous! In the new one-shot comic HALLOWEEN EVE by Brandon Montclare (Fear Itself: Fearsome Four) and Amy Reeder (Batwoman, Madame Xanadu), to be published in October by Image Comics, Eve gets a bump in the night that could turn her dead-end job deadly. Surrounded by masks, costumes, and novelties that her that have come to life, Eve will have to fight her way through a horde of horror or she’ll never make it to Halloween!

Conceived and drawn by Reeder and written by Montclare, HALLOWEEN EVE isn’t just a spooky scamper; it’s also the story of Eve — an expert costumer who loves to dress up, snarky and able to mercilessly size up others, but not so great at seeing herself for who she really is. The Halloween items that come to life have one goal: to find out who Eve is beneath her masks.

"Halloween Eve will break your heart and blow you away!" said Reeder. "I am so excited to be creating my own characters and story, and I’m glad it’s in the hands of what has lately felt like creator-owned central, Image Comics.”

"Working with Amy Reeder to co-create Halloween Eve was already almost too good to be true," added Montclare. "Being at Image—without a doubt the place-to-be for creator-owned comics—is unbelievable.”

After running a successful Kickstarter campaign that met its goal just six days after being launched, Reeder and Montclare announced that HALLOWEEN EVE was coming to Image Comics in a July 19th interview at Comics Alliance.

HALLOWEEN EVE is a 40-page (32 story pages plus other content) full-color comic, due out in October 2012 to celebrate Halloween. It’s a stand-alone, self-contained tale of magic and adventure geared toward teen and adult audiences. It will be available for pre-order in the August issue of Previews. 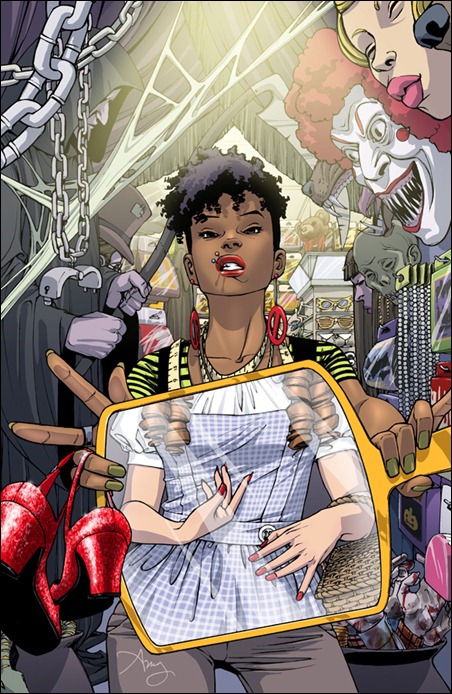