SUPERPOWERS LEAD TO SUPER PROBLEMS IN I LOVE TROUBLE

Felicia Castro, the protagonist of the new Image Comics series I LOVE TROUBLE by Kel Symons and Mark Robinson, debuting in December, doesn’t have much going for her. A New Orleans grifter on the run from a mobster, Felicia has to flee the Big Easy to hide out in the Midwest. Then her plane crashes.

Instead of it being the end for the Felicia, the crash turns out to be a new beginning. Felicia discovers she has the ability to teleport, a power she thinks will be an easy fix to all of her problems. But Felicia is someone who follows trouble, and her power opens up a whole new world of crime and exploitation.

"I imagine her as someone who was always on the run from one thing or another in her life — came from a broken home, had terrible experiences with relationships — and when things got bad she just picked up and left," said writer Symons. "So the idea of teleportation fed into that."
The premise of Felicia’s power being tied with her personality was what artist Robinson said won him over. "Kel’s ideas were crisp and sharp," said Robinson. "The book is supposed to be more about the person than the power. Kel’s scripts leave me a lot of room to do my thing visually, which I am grateful for."

The breathing room has allowed Robinson to shine, said Symons. "There’s a uniqueness to what Mark’s doing — you can just see he’s working on another level, that he takes what’s in a script and finds something you didn’t even realize was there and runs with it."

Robinson names Will Eisner as one of his primary influences in drawing I LOVE TROUBLE. "It’s not a superhero story, yet it needs to capture the same excitement and sense of the fantastic that Eisner puts into his work," he said. "I want people to see the characters do things in this book that puts them right in the middle of a scene from their own life."

Symons was a producer of The Dungeon Masters, a documentary about Dungeons and Dragons players, and also produced and directed the documentary Excavating the 2000-Year-Old Man. He was involved, as a development executive, in the film adaptation of Tom Clancy’s Jack Ryan noveI The Sum of All Fears. He also developed the feature films Sahara and Invictus. I LOVE TROUBLE is his first comic book series.

Robinson has been drawing comics professionally since 2001 and is best known for his work on the IDW series Storm Shadow and the Marvel series Hulk and Skrull Kill Krew.

I LOVE TROUBLE is a full-color, ongoing comic book series. Its first issue will be in stores on December 5 and is available for pre-order in the December issue of Previews. 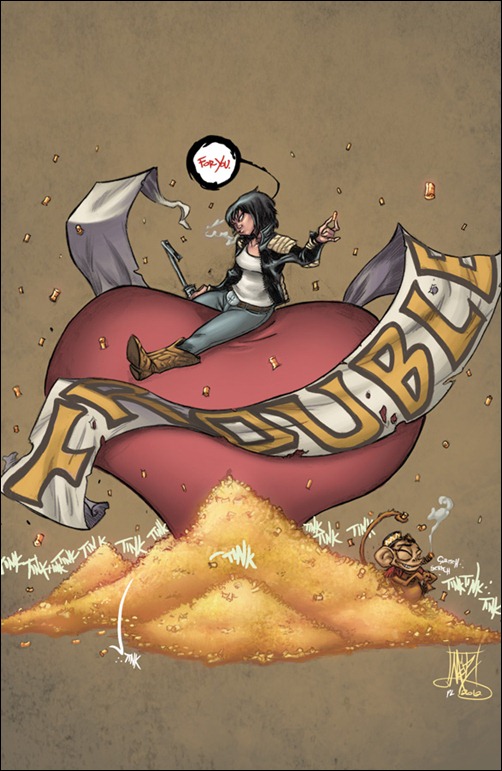