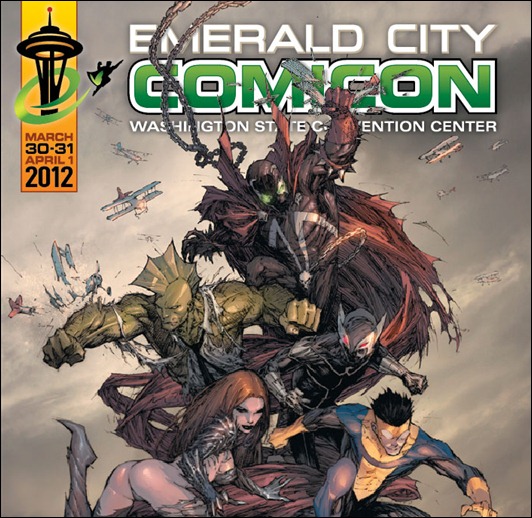 Image Comics is showing up in a big way at Emerald City Comicon (ECCC) in Seattle, Washington this March 30 through April 1, with a slew of convention exclusives (announced here) and an extensive signing and programming schedule. Many Image creators will be at the Image, Skybound, and Top Cow booths, as well as manning their own tables in the Washington State Convention center.

A panel schedule, signing schedule, and full list of Image creators attending ECCC follow. If you are interested in scheduling an interview with any of the Image creators regarding their Image titles, please contact Jennifer de Guzman at [email protected].

There will be six Image Comics-related panels during ECCC:

Creator Spotlight: Marc Silvestri
Join Top Cow founder, Image partner, movie producer and top industry artist Marc Silvestri (THE DARKNESS) as he takes a retrospective look at his legendary career spanning three decades. Moderated by Top Cow Publisher Filip Sablik, Silvestri will look back at everything from his early years on such top titles as X-Men and Wolverine to the founding of Image Comics and Cyberforce to the redefining of his company and the creation of mini-icons like Witchblade and The Darkness. Friday, 4pm, Room 211

Robert Kirkman Q&A
Kirkman, one of the most successful writers in comics today, best known for his work on The Walking Dead, Invincible, and Super Dinosaur, will offer fans some insight into the genius behind their favorite hit comics. After becoming an Image Comics partner in 2009, introducing the internationally renowned hit TV show based on the comic, "The Walking Dead" on AMC, and recently announcing an upcoming video game adaptation of the same series from TellTale Games, he has proven to be an unstoppable creative force. Friday, 7pm, Room 4C1-2

Image Comics – 20 Years of Creator-Owned Independence
Some of the most exciting rising stars in comics today and established creators alike will be coming together to talk about the past, present, and future of Image Comics. Join Ed Brubaker (Fatale), Joe Casey (Butcher Baker, Officer Downe, Haunt), Brandon Graham (King City, Prophet), Joe Keatinge (Glory, Hell Yeah), Emi Lenox (Emitown), Nathan Edmondson (Who Is Jake Ellis?, The Activity, Dancer), and Natalie Nourigat (Between Gears) to experience this lively conversation and be among the first to hear some big announcements! Saturday, 12pm, Room 4C3-4

Top Cow’s REBIRTH: The Beginning
Join Top Cow Publisher Filip Sablik as he leads an informative and lively discussion about the 20th Anniversary of Top Cow and the REBIRTH of the Top Cow Universe in 2012 with creators including Marc Silvestri and Jeremy Haun. Be the first to hear exciting new announcements, get added insight into the state of the Top Cow Universe, and get your questions answered! Saturday, 1pm, Room 4C1-2

Talkin’ Dead with Jon Bernthal & Laurie Holden
A "lively" discussion with The Walking Dead stars Jon Bernthal and Laurie Holden. Join them as they talk about the show’s record breaking viewing numbers, what it’s like to film in an apocalyptic, zombie filled world and what the future holds for Shane and Andrea. Hosted by David Boze (KTTH 770 AM). Saturday, 1 pm., Room 4A

Take to the Sky: Skybound and the Next Generation of Independence
Things continue to look up for Skybound, Robert Kirkman’s imprint at Image Comics. The premiere original Witch Doctor has sold out nationwide, the all-ages hit Super Dinosaur  continues to soar, and And Kirkman’s first-ever writers’-room-driven crime drama, Thief of Thieves, is a critical success… what’s next? Join Robert Kirkman as he discusses the future of the imprint with his stable of creators, including the creative teams behind Witch Doctor, Thief of Thieves, and more! Expect only AWESOMENESS. Sunday, 12pm, Room 4C3-4

Besides their own tables, Image creators will be signing at the Image, Skybound, and Top Cow Booths: