James O’Barr Returns to Comics
with a New CROW Series!

IDW Publishing is thrilled to announce that The Crow’s original creator, James O’Barr will be launching a brand-new story featuring the vengeful avian guide, THE CROW: SKINNING THE WOLVES, a three-issue miniseries set to debut this December. Fans of O’Barr’s dark signature style will be delighted to see him backed by co-artist Jim Terry with a story woven of the same supernatural mystique that made The Crow a favorite of fans worldwide.

“I’ve been wanting to see a new Crow project from James O’Barr for a lot longer than we’ve had the Crow license,” said Chris Ryall, IDW’s Chief Creative Officer/Editor-in-Chief, “and what James has lined up for Skinning the Wolves and beyond is definitely delivering on those expectations.”

Set in a European concentration camp in 1945, Skinning the Wolves investigates a world where the dark harbinger of vengeance is dispatched in response to one of history’s greatest atrocities and the ultimate evil that perpetrated it.

"This is a story I’ve had planned for ages; 20 years maybe. It’s a tough tightrope to walk, using a concentration camp as a setting for a story, but I took care in not exploiting the situation for entertainment purposes. I did layouts and a rough story outline, but got sidetracked with the increasing popularity of the original film and graphic novel of The Crow and never found the time to finish it,” said O’Barr. “I met Jim Terry a few years ago and was really truly impressed with his Eisneresque style and thought it would be perfect for him. He’s gone above and beyond my expectations and I’m very proud of him and this book."

“I couldn’t have asked for a better story to work on, and it has been thrilling to see it develop into what I feel will be a truly special book,” said Terry. “There are many, many titles on the stands these days, but I believe SKINNING THE WOLVES will be different from them all–not from a place of hubris, but from genuine excitement over what it’s become.”

Full of the dark, challenging questions and ideas that have propelled The Crow to international acclaim, Skinning the Wolves is sure to be a gritty spectacle; one not to be missed by any comics fans, macabre justice enthusiasts, or those in between.

Veteran producer Edward R. Pressman, producer of the 1994 smash hit film The Crow, together with Relativity Media and Dimension Films, is at work on a reinvention of the original film, which explores its own unique storyline separate from the comic book, with F. Javier Gutierrez (Before the Fall) attached to direct from a screenplay by Jesse Wigutow and Marc Klein. Pressman licensed the comic book rights to IDW. The deal was brokered by Dan Kletzky of Entertainment Licensing Associates. 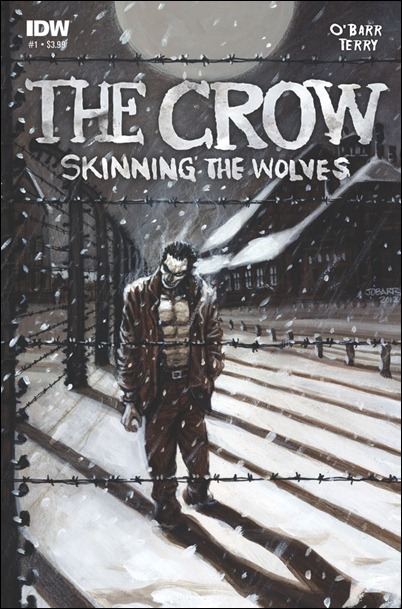