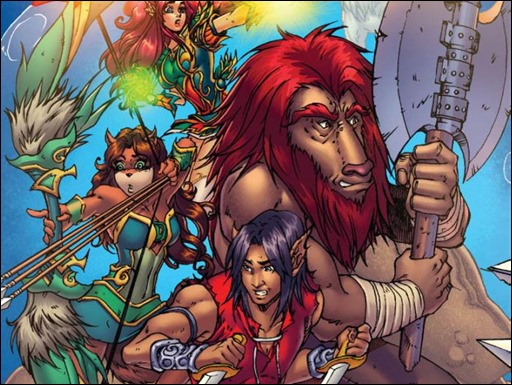 Knightingail: Shadow Divisions continues the adventures of Knightingail where the first mini-series volume, Knightingail: The Legend Begins, left off. Knightingail and her four Centurion companions must use their combined powers to destroy Luceus and his invading army. At first, they find that their combined powers are able to easily overcome the evil Whitesticks, Lava Dogs, and fire and acid breathing Dracons. However, the stresses of war soon bring their toll on the five over-worked Centurions, and divisions erupt between even the closest of friends. Taking advantage of these divisions, Luceus contracts with a tribe of assassin warriors called the Shadow Ravens to assassinate the isolated Centurions. Sicari, Queen of the Shadow Ravens, leads the assault herself against the a lonely and distraught Knightingail, who must somehow find the will to survive and re-unite her friends once more.

Knightingail: Shadow Divisions will include the same phenomenal, full-color artwork seen in the first volume. Mel Joy San Juan is the new penciller/inker on the series who brings the same amazing details and expressive facial emotions to Knightingail and the other characters (as seen in the first few pages of dynamic artwork from the series). Colorist Katrina Mae Hao returns from the first volume to bring her breath-taking color artwork to the world of Knightingail. Both artists were contracted through Glass House Graphics, who provided the artistic talent for the first Knightingail series.

Knightingail: Shadow Divisions will also feature amazing cover artwork. Keeping with Big Dog Ink tradition, two covers will be released nationally in stores. The Cover A artwork will be provided by interior artists Mel Joy San Juan and Katrina Mae Hao. Cover B artwork will be illustrated by the amazing team of Nathan Seals and Kate Finnegan (issues 1-3) and Val Hochberg and Kate Finnegan (issues 4-6). Both artists teams on the Cover Bs provide a unique Disney-Manga like full-painted art style. In addition, Wayne Gardiner has contracted with top comic cover artists to provide variant chase covers for this series. Illustrators contracted so far include Dawn McTeigue, Jen Broomall, Mike DeBalfo, and Nei Ruffino with colors being provided by Ula Mos and Nei Ruffino. 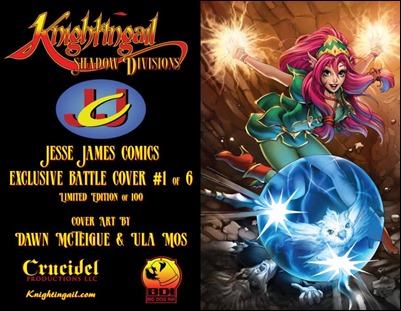 The McTeigue/Mos covers are particularly special because their covers for issues 1-6 connect together to form one large battle image. There were be two variants of these amazing covers. The first will be a limited edition set of 250 of each cover released at comic book conventions throughout the summer. In addition, there will be a variant edition of these covers with new drawings and new colored artwork released as a limited edition of 100 Jesse James Comic exclusive. The artwork for both of these connecting cover sets are truly dynamic but also capture the fun, heroic, and fantasy world of Knightingail. 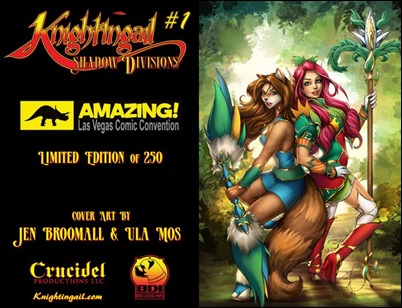 If you enjoyed Knightingail: The Legend Begins, creator Wayne Gardiner promises an even more thrilling and dynamic story in Shadow Divisions. Now that the world is established, this series launches fiercely into the challenges, perils, and anguish that result from war. There will be much larger and epic battles only hinted at in the first volume. Wayne also retains the emotionally charged and sometimes hilarious dialogue that passes between Knightingail and her friends. However, new readers will not have to have read the first volume in order to enjoy Shadow Divisions. Wayne weaves a narration monologue by Knightingail throughout the first issue introducing new and continuing readers to everything they need to know to appreciate the events of this new series. 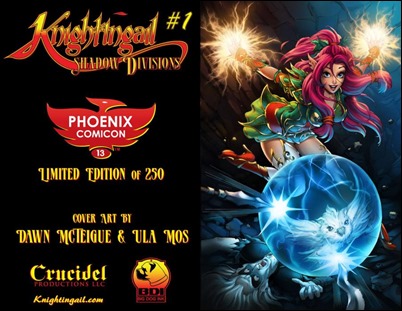 A free 5-Page preview of Knightingail: Shadow Divisions #1 is currently posted on the Knightingail website for fans to get a first look at the amazing artwork and story from this new series.