Crystal Dynamics™, a Square Enix® studio, and Dark Horse Comics, today revealed they have partnered to bring the re-imagined Lara Croft back to print in the world of comics. Look for news on the new series following the release of TOMB RAIDER®, the highly anticipated origin story for Lara Croft®, available March 5, 2013, and will chronicle Lara’s journey after her harrowing adventure in the Dragon’s Triangle.

A 48-page, six-part hardcover omnibus, “TOMB RAIDER: The Beginning” follows the story of how the crew came together for The Endurance’s fateful mission to discover the lost Japanese kingdom of Yamatai. Originally intended to feature as the latest instalment of Dr. James Whitman’s successful archaeology show, Whitman’s World, the show-biz archaeologist gets more than he bargained for when he enlists the help of Captain Conrad Roth. As Roth’s unique and eccentric crew gradually come together and share their stories and secrets, the expedition faces unexpected threats before it’s even begun.

“Lara Croft is an icon across all forms of media, including comic books,” said Karl Stewart, global brand director for TOMB RAIDER and Crystal Dynamics. “The team at Crystal Dynamics has worked closely with Dark Horse on ‘The Beginning’ to bring the relatable, re-imagined Lara Croft back to the comic book world.”

"Whilst penning Lara’s origins story for the game I had lots of ideas about the world she and the other characters inhabited, and the story behind their voyage: as great to be able to flesh out the world of TOMB RAIDER and work with the talented team at Dark Horse to bring Lara Croft back to comics,” said Rhianna Pratchett, lead game writer for TOMB RAIDER.

"The bold new vision of the game demanded we bring an equally fresh approach to the comics," said Dave Marshall, editor at Dark Horse. “We’re excited for TOMB RAIDER fans to experience a new side of Lara Croft as they accompany her on the earliest parts of her first adventure.”

To celebrate the partnership, Crystal Dynamics and Dark Horse revealed four pages from “TOMB RAIDER: The Beginning.” The full comic is available as a bonus when you pre-order TOMB RAIDER at Best Buy. More news on Tomb Raider comics will be available in the coming months. 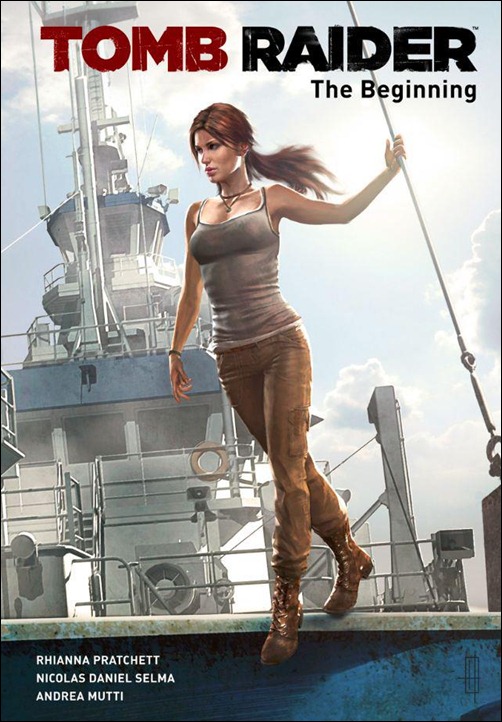