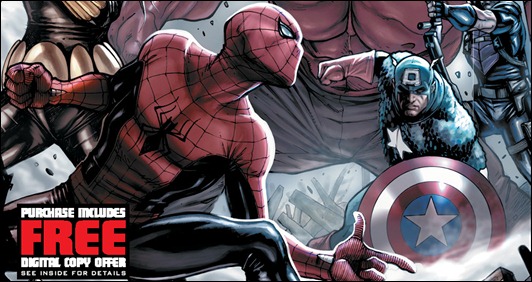 Marvel Comics announced that beginning in June 2012, all comics with a cover price of $3.99 or greater will include a code for free digital copies of those comics. 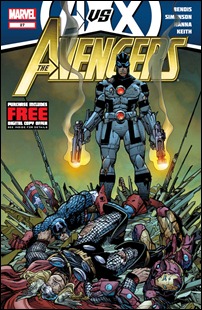 Marvel has been talking about “adding value” to their $3.99 price point books since they began offering free digital codes with their Ultimate Comics line a few months ago. This time they are going line wide with their offer.

The move may help Marvel by introducing readers to digital who may not otherwise purchase a digital copy, although it’s questionable whether Marvel is actually “doubling the value” of their comics by offering digital. I’m sure that not everyone who buys a print copy really cares about having a digital copy.

By offering a “free” copy with their $3.99 books, they are giving you an added value, but at the same time it pretty much assures that those books will never decrease in price – even if their page count might decrease.

Marvel is proud to announce that, beginning June 2012, all Marvel super hero comics priced at $3.99 will include codes for free digital copies of those same issues on the Marvel Comics app for iOS and Android devices at no extra cost! That’s right, the most-talked-about comics in the industry—including Avengers, Captain America, Invincible Iron Man, Mighty Thor, Amazing Spider-Man. Wolverine & The X-Men and more—will come packed with a code to ensure fans have the most critically acclaimed stories with them anytime, anywhere. 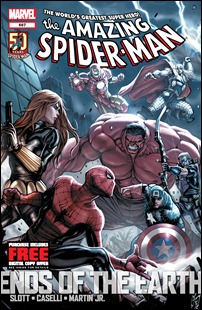 “We’re committed to bringing fans the best value in comics. By including codes for free digital copies in all our $3.99 super hero comics, we’re doing just that” said David Gabriel, SVP of Sales, Marvel Entertainment.   “We’ve seen a tremendous response to the digital codes in Avenging Spider-Man, our Season One graphic novels and the Ultimate Comics line. The positive reactions from both retailers and fans make it clear that including these codes with our books drives customers into comic stores on a repeated basis.”

Marvel made comic book history in 2011 by announcing  all titles in the Ultimate Comics line would include codes for free digital copies on the Marvel Comics app, with unrivaled incentives for comic shop retailers. Then, in 2012, Marvel announced the acclaimed Season One graphic novels would also include similar codes making them the first graphic novels to ever include codes for free digital copies at no extra cost.

“At Marvel, we’re always looking for ways to bring the worlds of print and digital media together to deliver the best comics experience for our fans,” said Peter Phillips, SVP & GM, Marvel Digital Media. “With this next step, fans will soon be able to buy their comics from their favorite retailers but also enjoy them on their mobile devices and tablets, all at no extra charge. Welcome to the Revolution.”