The Future of DEADPOOL Is I SCREAM!

This April, Wade Wilson makes a deal with the devil (sort of) in Deadpool #8, kicking off the all-new arc from the blockbuster creative team of writers & comedians Brian Posehn (The Sara Silverman Program), Gerry Duggan (Attack of the Show!, Infinite Horizon) and superstar artist Mike Hawthorne (Conan)! As part of Marvel NOW!, Deadpool takes no prisoners, as the industry’s top creators join the top Super Heroes to deliver all-new ongoing series, great for new and veteran readers alike!

The Presidents are dead (again) but that doesn’t mean Deadpool is done with the re-animated! When Wade makes a deal with a demon to collect souls of the damned, he finds himself in a precarious situation because if he does not complete what’s asked of him – one his closest friends will be taken FOREVER!

“Brian, Gerry and Mike are cranking up the volume way past 10 for this one,” said Axel Alonso, Editor In Chief, Marvel Entertainment.  "You scream, I scream, we’ll all be screaming for more Deadpool when you see just how much we’re letting them all get away with!"

Marvel NOW! is the culmination of Marvel ReEvolution, the groundbreaking new initiative to evolve the comic book experience through innovation. With Deadpool, Marvel NOW! ensures fans will discover an entirely new perspective on the Merc with a Mouth.

Each issue of Deadpool features special augmented reality content available exclusive through the Marvel AR app – including cover recaps, behind the scenes features and more that add value to your reading experience at no additional cost.

An all-new direction! All-new threats! This is Deadpool NOW!

This April, Brian Posehn, Gerry Duggan, & Mike Hawthorne bring new meaning to the name “Merc with a Mouth” in Deadpool #8! 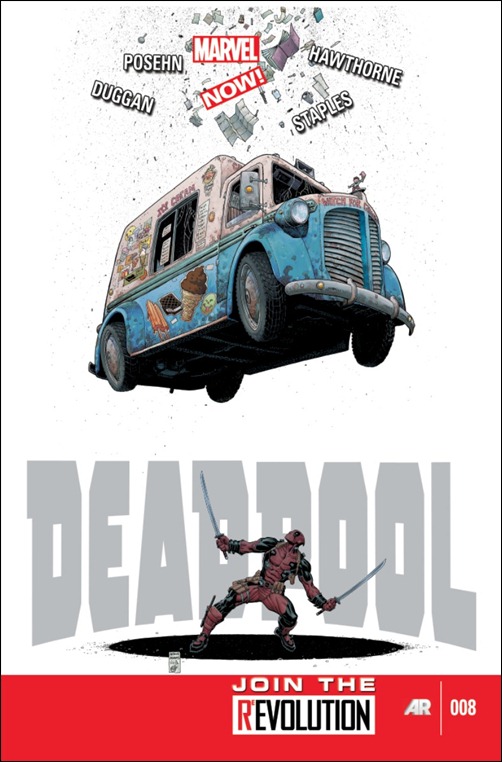