Scott Campbell is a New York native whose art is celebrated around the world. He is a maker of paintings, illustrations, comics, kid’s books and video games. Part of the Gallery 1988 phenomenon, people flood galleries to see his work and snap up his wondrous and wondrously fun pieces. Some of his most notable projects include the Great Showdowns series, Igloo Head and Tree Head series, Double Fine Action Comics, Hickee Comics, the children’s books Zombie In Love and East Dragon, West Dragon.

Here Scott C. talks about his work recreating some of the best and most iconic moments of movie and TV culture from his latest project The Great Showdowns with Titan Books. With a foreword by Neil Patrick Harris (a fan who owns several originals from the series), The Great Showdowns collects the most memorable moments of melee, interpreted by Scott in his inimitable style, including Chief Brody vs Jaws, Die Hard’s John McClane vs broken glass, Ripley vs the Alien Queen and even Spinal Tap vs an undersized model of Stonehenge.

Walter Simonson, who lives in New York, is one of the most highly regarded comics creators around, having written, pencilled or inked Batman, The Hulk and Superman, to name but a few! He was awarded the 2010 Hero Initiative Lifetime Achievement Award at the 2010 Harvey Awards. Here he discusses his ground-breaking work on the original Alien graphic novel, republished and re-mastered by Titan Books. Walter reveals how, so early in his career, he came to work with Ridley Scott on one of the most famous films of the 20th Century, and what it was like to work with Archie Goodwin, a legend in the comic industry. Fans also will learn how it became possible to reproduce the original artwork for so seminal a project, more than 30 years later!

Presenting for the very first time: the definitive artist’s edition to the greatest Sci-Fi horror ever produced.

Celebrating the life of Joe Simon, co-creator of Captain America, creative partner of Jack Kirby, and the man who hired Stan Lee for his first job. It’s the day after what would have been his 99th birthday, and we’ll party the way Joe would have like it! Steve, Paul, and Jim will be joined by a group of surprise guests, and lucky attendees will be eligible to receive exciting birthday presents — including a copy of Joe’s autobiography, signed by Joe!

The Walking Dead, The Official Magazine Launches at NYCC 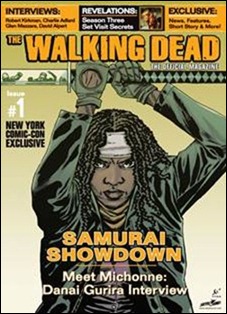 Titan Merchandise are back at NYCC, bigger and bolder than ever after a year of faster-than-a-speeding-bullet growth, widespread fan acclaim and killer product launches for Doctor Who, Star Trek, Kick-Ass, Judge Dredd, Hammer Horror and many more!

We’ll be selling a wide variety of never-before-seen debut tee shirts at Booth 832 and a handful of super-rare NYCC exclusives. Booth 832 is the ONLY place you can buy our NYCC exclusive DOCTOR WHO MAXI-BUSTS (Eleventh Doctor, Tenth Doctor and Cyberman variants – ALL exclusive to Comicon). If you want to buy the sweetest CAPTAIN ACTION tee shirt and gifts ever produced, Booth 832 is the place to be! If you want THE coolest limited edition, one-time-only DOCTOR WHO shirt at NYCC, make sure you visit Booth 832 before they all sell out – once they’re gone, they’re gone FOREVER!

ABOUT ROBERT KIRKMAN
Robert Kirkman’s success and passionate advocacy for creator-owned comics led him to become the first person invited to become a partner at Image Comics since the company’s inception twenty years ago and he formed his own imprint there, Skybound, in 2010.  Kirkman is the creator/writer of the Eisner Award-winning The Walking Dead, long-running Invincible, all-ages Super Dinosaur, The Astounding Wolf-Man, and new title Thief of Thieves, among many others. Kirkman has earned the respect of the comic, writing and television communities and topped the New York Times bestseller list for graphic novels in 2011 and in April 2012, he took the top five spots on both the hardcover and paperback lists. He’s the creator/executive producer and writer of the hit television show, AMC’s The Walking Dead, the highest-rated basic cable drama of all time in the U.S, also an international success in 120 countries and 250 million households. AMC is developing Thief of Thieves as a  potential series with Kirkman serving as creator/executive producer and writer. www.Skybound.com is your destination for all news and merchandise for Robert Kirkman, The Walking Dead and all Skybound titles.