Get ready because the entire Valiant Universe is heading to New York Comic-Con (NYCC), the East Coast’s biggest and most exciting pop culture event! Join Valiant’s creators and staff from Thursday, October

11th through Sunday, October 14th for a weekend packed with exclusive merch, signings, and news direct from the heart of the Big Apple.

Kick off the show with a bang and join Valiant on Friday, October 12th at 2:45 pm at "The Future of Valiant" panel to hear all of the exclusive news and announcements behind the next great happenings in the Valiant Universe! Featuring Joshua Dysart (Harbinger), Justin Jordan (Shadowman), Duane Swierczynski (Bloodshot), Fred Van Lente (Archer & Armstrong), Executive Editor Warren Simons and Chief Creative Officer Dinesh Shamdasani, this is the one-and-only place to discover what 2013 holds for Valiant’s greatest heroes. 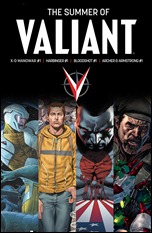 All weekend long, stop by the Valiant booth (#1220) to catch up with the creators and characters behind the Valiant Universe with non-stop signings and con-exclusive offerings, including blank cover double-sided flipbooks, Valiant t-shirts, and "The Summer of Valiant" Collected Edition – a limited edition, square-bound collection of Valiant’s first four #1 issues. And check out Valiant’s hottest new releases with a FREE Valiant Preview Edition, starring X-O Manowar and Shadowman!

Be sure to swing by any of Midtown Comics’ three Manhattan locations to pick up a FREE copy of Bloodshot #1 with purchase of any NYCC ticket (while supplies last). Tickets are going quickly, but Midtown still has four-day passes available at all locations! Visit MidtownComics.com, NewYorkComicCon.com and ValiantUniverse.com for more information.

We’ll see you at NYCC!