PETER PANZERFAUST IS ON THE MOVE 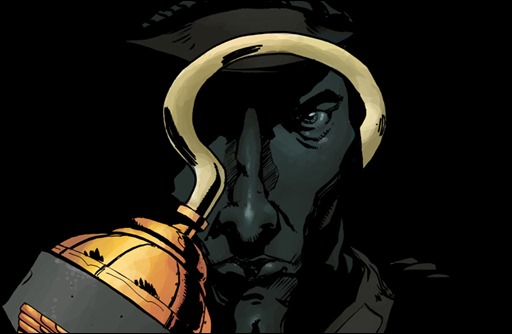 Wood and Glau voice the indomitable characters of Peter and Wendy, while Perlman brings to life Peter’s arch-nemesis, the Nazi officer Kapitan Haken, the series’ incarnation of Captain Hook.  Basco, who played Rufio in the 1991 movie Hook, will return to the Neverland universe as the voice of Alain. The world premiere of a trailer for the motion comic will be shown at a panel at the Chicago entertainment convention C2E2. The session will feature PETER PANZERFAUST creators Wiebe and Jenkins and Jeff Krelitz of Quality Transmedia, and takes place on Saturday, April 27 at 3:15 PM CDT.

The motion comic isn’t all PETER PANZERFAUST fans have to look forward to.  Adjacent Productions and Quality Transmedia have announced that a live-action series based on the comic is also in development, and in May, Image Comics/Shadowline will release the second trade paperback volume of the series. PETER PANZERFAUST: HOOKED (ISBN 978-1607067283) collects issues #6–10 of the series and features the introduction of Kapitan Haken, as well as the continued adventures of Peter, the Lost Boys, Wendy, and Tiger Lily in their fight against the Nazis as part of the French Resistance. It will be in stores on May 15 and is available to pre-order now. Peter’s adventures will continue in PETER PANZERFAUST #11 in July.