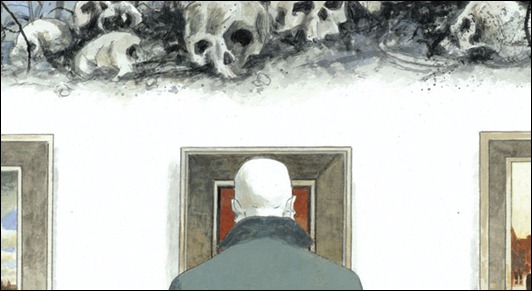 Steven T. Seagle (of MAN OF ACTION studios) and Eisner Award-winning painter Teddy Kristiansen have worked on comics projects together since 1995. Their work together runs the gamut from literary autobiography to genre fiction with such iconic works as it’s a bird… and House of Secrets. But their flip-book graphic novel THE RED DIARY/THE RE[A]D DIARY, coming from Image Comics in June, may be their most innovative collaboration yet.

"The images of war were arresting and the sequences set in the world of fine art contrasted them so starkly that I couldn’t get it out of my mind," said Seagle. "I immediately wanted to bring the book to American readers as soon as I saw it."

There was a problem, though: The Red Diary was published only in French and Danish, two languages that Seagle does not speak. 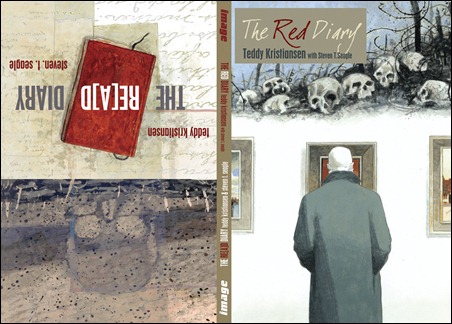 "It started to dawn on me that even though I was taken with Teddy’s book, I had no idea what it was about! Just a story I’d started to make up in my head about what I assumed was happening in his pictures," said Seagle. "Eventually, I got Teddy to let me write my version of what I thought was going on before working with him on the translation of what was actually going on."

So, as he awaited Kristiansen’s English translation, Seagle wrote — with Kristiansen’s blessing — a new script for the existing art.

The result is THE RED DIARY/THE RE[A]D DIARY, two graphic novels in one: Kristiansen’s original story translated into English for the first time — a tale of a Vermeer painting with questionable provenance and a diary that reveals its secrets; and Seagle’s "remix" of The Red Diary‘s art into a story of an infantryman’s war transgressions and how a stolen identity saved two lives. The two versions are arranged as a flip-book with two front covers.

Seagle added, "It’s amazing that one set of images could support two totally different tales. Because despite my best forensic efforts, our two stories turned out nothing alike!" 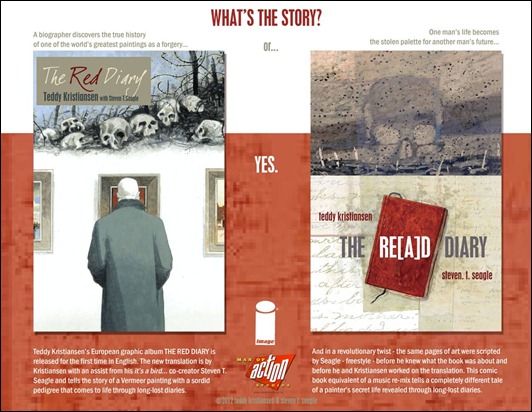