Will the real Mr. J please stand up?

SPOILER ALERT: I might be slightly spoilerific here, so if you haven’t read the book yet, consider yourself warned.

It’s a little tough “reviewing” a book like Batman #13. With all the hype, everyone knows about it and is already discussing it. They’ve picked up the book and already formed their opinion of it. So… let’s call this little write up of mine less of a “review” and more of a “discussion”. 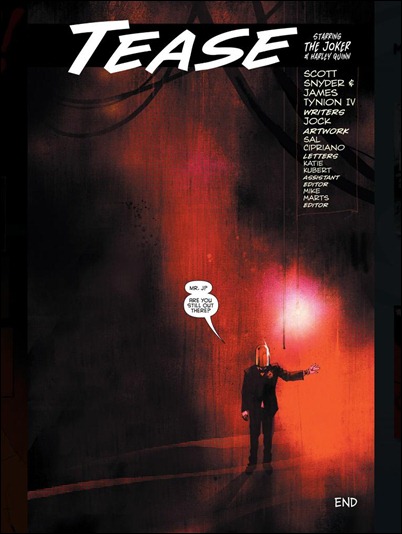 Alright, so “technically” this was the last page of my book.

Well, I didn’t either. I read the story front to back, like the good soldier I am. There hasn’t been much I’ve liked about the New 52 so far, but what DC has done with the Joker? Wow! Twisted. Really twisted. I don’t think I’m giving much away here by saying that it’s pretty flippin’ dark that the Joker’s got his face (that was cut off his skull back in Batman #1) strapped to his cranium with a belt. I don’t know who came up with that idea, but kudos. My hat is off to you. 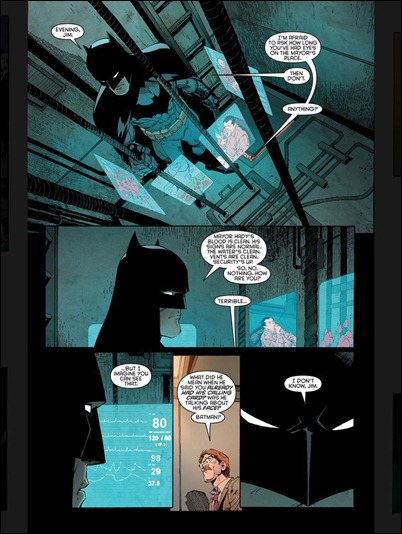 For me, the reason to read comics is the art. If I don’t like the art, it’s that much harder to get into the story. I gotta tell you, I love Capullo’s work. And I’m not just saying that so he’ll send me an autographed picture of the Bat family, either. I don’t know the guy personally, but… MAN!… do I like his style.

That being said, I’m not too sure of my feelings on this “new” Harley. I like her. A lot. That is, I liked the “old” Harley. Admittedly, I don’t know how much of her story has been rewritten in this New 52. But, the “old” Harley was twisted and fun. This new Harley? I don’t know. I’m not real crazy about the update to her look. Just going on what I read in Batman #13, it seems like her character is still in line with the old Harley. If that’s the case, I’ll learn to live with the updated look. I guess… 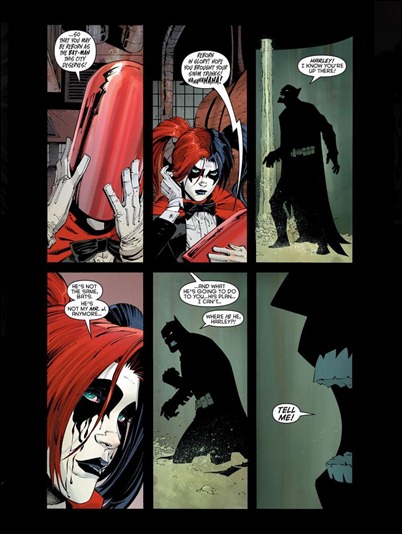 I do like, though, how Joker/Harley taunted Batman about his run in with the Court of Owls. And how he needed “help” from the Bat family defeating them. Scott Snyder’s story definitely has me intrigued. Where has the Joker been this last year? Why did he let Dollmaker cut off his face? Where does the Joker fit into the New 52? And what is up his butt, besides?!?!? Lots of questions (those four were the only ones that I could come up with at the moment) that hopefully will get some resolution during this “Death in the Family” event.