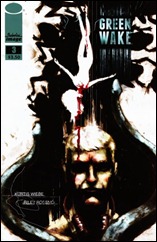 Green Wake #3 continues the surreal story of a mysterious place where everyone harbors a deeply buried secret. Morley, Krieger, and Carl are still on the trail of Ariel, Carl’s girlfriend, who has been on a murderous path through the Green Wake. They need to find her before she kills again; But what will they do when, and if, they find her?

They find themselves in an old church building inhabited by a man in priest’s clothing named Ishum. Ishum talks privately with Morley, convincing him to talk about his past with Anna as a way to enlightenment and understanding of the Green Wake. Throughout the issue, Morley struggles with the memory of his Anna, who he accidentally killed in a car crash. We learn a bit more of his relationship with Anna and the events leading up to the accident in lengthy flashbacks.

As a realization overtakes him, Morley knows who the next victim will be. Will they get there in time before another murder is committed and will they find out where they truly are?

Green Wake #3 is another fine issue by Kurtis Wiebe and Riley Rossmo. If you’re looking for answers in this book, you’ll find a handful of questions for every answer you think you’ve found. This is a strange and wonderful series; One that makes you anticipate the next issue because it teases you with answers just beyond your reach. You know that there’s a thread holding everything together in the Green Wake, yet it’s invisible to the naked eye.

As I found out when writing my review of the previous issue, Green Wake has been made an ongoing series from it’s originally planned five issues. Thankfully for us, we get to see Kurtis and Riley flesh out more of the mysterious place for us. I don’t think a limited series would have sated my appetite for the surreal landscape they’ve offered up!